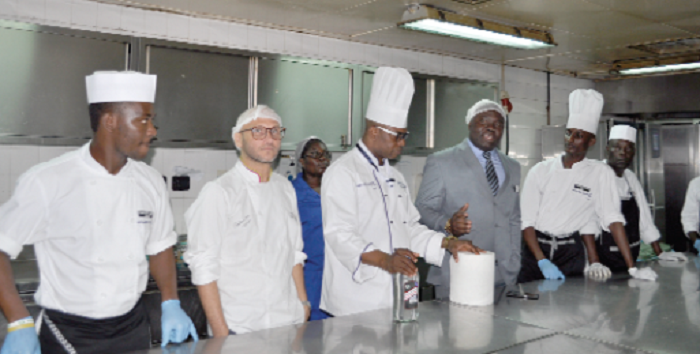 In a bid to promote trade by exhibiting the culture of other countries, Golden Tulip, Accra, in conjunction with the Embassy of Colombia, has earmarked series of activities to mark the 207th National Day of Colombia.

A week-long ‘Colombia Food Festival’ featuring the best of Colombian cuisine, music and culture will be showcased everyday at the hotel’s pool gardens next week.
Every July 20 is observed as Colombia's national day as it marks the start of the Colombian movement to independence from Spain in 1810. The independence day is celebrated with parades throughout Colombia. Watching sports and listening to traditional folk music are popular activities.

Speaking on behalf of the management of Golden Tulip Accra, Mr Marshall Otu, Food & Beverage Manager, emphasised that as a hospitality service provider, the hotel believed a lot in cultural exchange as it provided  the opportunity of learning the cuisine and cultures of other nationals in order to serve clients better.

“We are hosting a Colombian chef throughout next week to showcase the indigenous Colombian cuisine and to witness the rich culture of Colombia as we partner the Colombian Embassy in Ghana to mark the day.”

The hotel, he assured, would continue to partner other nationals by supporting them to see how best they could celebrate their national events.

Throwing more light on what clients should expect next week, the Golden Tulip Executive Chef, Leslie Quarmyne, stated that ingredients used for most Colombian cuisine such as plantain, yam and coconut were basically the same as the ones used in Ghana “so it will be incorporated in the menu to give a unique experience”  and invited the public to come and witness a blend of Ghana and Colombia through the local cuisine being exhibited.

For his part, the Colombian chef, Mr Carlos Otero, disclosed that about 70 per cent of food in Colombia was from Africa “which shows a big part of Africa lives in Colombia as such the week-long celebration is just like bringing back to Africa, African heritage food”.

He stated that the Colombian Embassy in Ghana was celebrating the event for the first time and expressed the hope that it  would continue to give its nationals a memorable independence day celebration through fun-packed activities such as the one being hosted by the Golden Tulip Accra.