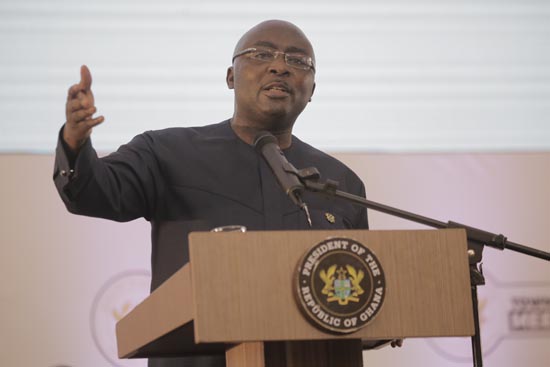 Vice-President Mahamudu Bawumia delivering his presentation at the town hall meeting organised by the Economic Management Team at the College of Physicians and Surgeons Auditorium in Accra. Picture: EMMANUEL ASAMOAH ADDAI Follow @Graphicgh

The government will, from today, slash down the benchmark values for all imports by 50 per cent, except duties on vehicles, which will be cut by 30 per cent.

This is part of reforms at the country’s ports aimed at reducing the incidence of smuggling at the ports, enhancing revenue mobilisation and making Ghana’s ports competitive.

The reduction is also in response to calls by importers on the government to reduce import duties.

Delivering a lecture in a packed Town Hall Meeting in Accra on the state of the economy, the Vice-President and Chairman of the Economic Management Team (EMT), Dr Mahamudu Bawumia, also announced that only 10 per cent of containers would go through physical examination and that all inspection agencies must conduct the examination on the 90 per cent at the same time to avoid duplication of work and waste of time and reduce corruption.

“There will be no longer separate examination of containers by any government operative at the gates of exit,” he declared.

Dr Bawumia explained that duties on vehicles were given a 30 per cent reduction because they already enjoyed some reduction which would add up to 50 per cent.

He explained that the reduction in duties at the ports came after extensive discussions with stakeholders at the ports.

The announcement of port reforms drew thunderous applause mainly from some executives of the Ghana Union of Traders Associations (GUTA) and the Ghana Association of Freight Forwarders, who were visibly seen singing and dancing to ‘Aba mu awie’, which literally means ‘It’s been fulfilled’.

The lecture, which was on the theme: “Our Progress, Our Status, Our Future”, was to give an update of the economic performance of the government since its inception in January 2017.

Dressed in a blue slim fit political suit, Dr Bawumia was witty in his lecture and occasionally jibed at the economic record of the opposition National Democratic Congress (NDC).

The lecture mainly captured the broad themes of macroeconomic stability, inclusive transformation to help the poor and vulnerable, the digitisation process to formalise and transform the economy and enhancing the ease of doing business.

Surrounded by the eight other members of the EMT on the podium, the Vice-President also addressed issues of port reforms to enhance competitiveness, changing the structure of the economy through production and good governance through fighting corruption.

He urged the Customs Division of the Ghana Revenue Authority (GRA) and other government operatives at the ports to adhere to the recommendations of the risk engine under the paperless regime.

“Where containers are selected by the risk engine for examination, there will be a joint examination, which must include National Security.

There will no longer be separate examination of containers by any government operative at the gates of exit,” he told the cheering audience.

Again, he announced that the government would begin the implementation of the First Port Rule in June 2019, so that duty on all transit items would be paid at Ghana’s ports to Customs representatives of the country of destination.

“We will implement a strict ‘no duty, no exit’ policy for containers without exception. This will block leakages and increase revenue,” the Chairman of the EMT said.

He explained that after extensive discussions with traders, importers and freight forwarders, they were surprised that import duties had not been increased, although there were complaints that duties at the ports were on the high side.

He said to ascertain the real issues, the government set up a Ports Review Committee to ascertain the competitiveness of the country’s ports within West Africa and noted that the findings were surprising.

Dr Bawumia said the benchmark values applied by Customs to various commodities in computing import duties in Tema were about 200 per cent higher than what pertained in Lome, Abidjan and Dakar.

He added that except for Nigeria, the total marine charges and security fees charged at the Tema Port for container handling were higher than those of Ghana’s competitors.

He explained that they were three times higher than the charges in Lome, Togo and nearly twice the charges in Abidjan, Cote d’Ivoire and that no port in West Africa was charging the equivalent of the Ghana Maritime Security fee of nearly $20,000 per vessel.

Dr Bawumia added that import handling charges were higher in Tema than they were in any port in West Africa, while nearly 90 per cent of containers that came to the Tema Port were physically examined, but only five per cent were subjected to such physical examination in any other port.

He described physical examination as a major source of corruption at the ports, and that when the government dug deeper, it came up that the 90 per cent examination increased revenue by a mere 0.38 per cent.

He noted that because Ghana’s port charges were a percentage of the value of the goods imported, that had made the prices of the goods exorbitant and hardly justified.

“Why should the cost of scanning a container, vehicle examination fee, network charges be a percentage of the value of the goods in the container?” he asked rhetorically.

Dr Bawumia also wondered why the cost of processing documentation covering imports should be a percentage of the cost of the value of the goods and noted that those fees were flats charged in most modern ports.

He labelled the situation in Ghana where vehicles and commodities on which duties could not be paid were confiscated and later auctioned at much cheaper rates than the duties supposed to be paid as “archaic”.

He said for importers, the choice was clear, because empirical data indicated that there was an increasing diversion of traffic away from the Tema Port, coupled with increased smuggling of goods into the country, and added that container volumes in Lome between 2013 and 2018 went up by 300 per cent, while at the same time Ghana’s container volumes increased by just 4.1 per cent.

Dr Bawumia said after investigating, monitoring and analysing all the above, the Cabinet decided on new reforms, with the objective of increasing trade facilitation and efficiency and revenue mobilisation because port revenue depended on volumes, which could not be achieved without trade facilitation.

Turning to recent fluctuations in the value of the cedi, the Vice-President said the Bank of Ghana (BoG) did not spend any reserves to revive the cedi following its initial depreciation and dispelled suggestions that the central bank injected about $800 million into the economy to save the cedi.

He noted that the continued depreciation of the cedi at the end of March 2019 was as a result of some exit conditions of the International Monetary Fund (IMF).

We have to understand how come we saw this sort of movement in the exchange rate a few weeks ago. Why did it jump so far? Many reasons have been given, but let me tell you what happened.

The most important and proximate cause of the recent depreciation is the time inconsistency of an IMF prior action on the reserves target,” he said.

Dr Bawumia said as part of the prior actions to get to the IMF Board and the completion of the IMF programme, the Bretton Woods institution gave Ghana seven actions to complete before March 15, this year.

Using logic and analogy to explain his point about the strong fundamentals of the economy, he asked: “If I come to you and say if your leg is broken, you are going to be unable to walk, and if it is heard that someone is unable to walk, can I just conclude that your leg must be broken?”

The Vice-President said “the NDC logic will insist, on the face of contrary evidence, that if you cannot walk, your leg must be broken”.

Aided by Powerpoint, he listed the key achievements of the government since its inception in January 2019, including the restoration of teacher trainee and nursing trainee allowances, the creation of jobs, passport application and the One district, One factory, One village, One dam and One constituency, One ambulance initiatives.

Like a choirmaster conducting the choir, the list of achievements the Vice-President mentioned drew choruses from the audience, for which reason he stressed: “We have performed better.”