Business bounces back after elections 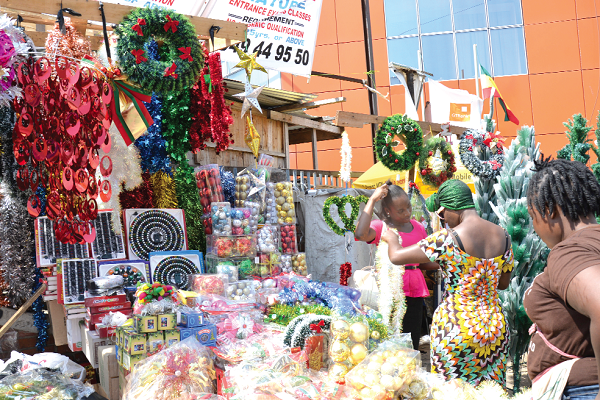 With the elections over and a winner declared, most traders are now turning their focus to doing very good business as Christmas approaches.

The traffic is back and so are traders who are gradually taking over the streets to mount their wares in a bid to attract customers and patronage.

Also, the Christmas atmosphere is visible and is being felt as businesses and organisations are adorning their buildings with Christmas decorative accessories, while traders have also begun stocking up.

The streets in Accra and Kumasi were very quiet on election day which was also declared a holiday. With the Farmers Day holiday shifted from December 4 to December 6, especially for the general election, the situation remained the same two days after the elections.

The usual heavy traffic and congested business centres usually experienced at the start of December in a build-up to the Christmas festivities were missing from last Tuesday to Thursday with an uneasy calm all around as the nation waited for the final declaration of the winner by the Electoral Commission.

However, the morning after the results were declared, the Daily Graphic observed that the traffic resurfaced in many areas in the capital.

Also, in the central business district (CBD), the traders were back, creating congestion on some roads and pavements, with their wares fully displayed.

Some shops and departmental stores have also begun playing Christmas carols and are also coming up with special discount sales, all in a bid to attract patronage.

From Accra’s CBD, Felicia Kwarteng & Augustina Dzodzegbe report that despite the situation, most traders the Daily Graphic spoke to said sales were yet to pick up but expressed the hope that things would improve in the coming days.

“Each election year, it takes some time after the voting for business to pick up and this does not seem to be different,” Maame Yaa Serwaa, a trader in shoes said.

"Things are slow and business is slower this year because of COVID-19 and the elections, but now that the election is over and the fear of COVID-19 has waned, we hope business will pick up," Hawa, another trader stated.

Hawa said they believed that the NPP winning the elections for the second time was going to lessen the economic hardships.

A group of traders at the Makola Market in Accra, draped in New Patriotic Party (NPP) paraphernalia, who were celebrating their victory in the presidential election, admitted business had been generally slow this year as a result of the coronavirus disease (COVID-19) pandemic, but were optimistic that with the infection under control in Ghana, things would improve.

“The outbreak of COVID-19 affected the livelihood of people and so business has not been that good. However, since the President was able to control the disease and the ban on social events lifted, we believe sales are going to improve again.”

While some traders complained about low patronage, some departmental shops such as Melcom have begun their discount sales for the Yuletide.

In Kumasi, the situation is no different as the Christmas fever is gradually creeping into the various markets, characterised by both human and vehicular traffic, reports Emmanuel Baah from the Ashanti regional capital.

The "frustrating" Kumasi motor traffic has started mounting with speed as the Yuletide approaches and many people are travelling to the CBD to stock up for their businesses in their communities.

A journey that could have taken one about 30 minutes could now be between two to three hours.

As it is often witnessed during this period, huge speakers have been mounted in the markets blaring out secular music and Christmas carols.

Many traders and shoppers who spoke with the Daily Graphic expressed satisfaction at the peaceful nature of the election and the fact that business activities were picking up more quickly than they had anticipated on their return to the market.

"Business has been good and sales have increased. The confidence level among patrons has been high on our return and it is reflecting in patronage," a trader told the Daily Graphic.

The Daily Graphic observed that most businesses that dealt in wholesale of their wares had many customers who had come to restock for the season.

A number of them who spoke to the team said they usually stocked up at the end of November in readiness for the Christmas, but this year, they wanted to wait for the outcome of the elections to decide what they had to do.

“In 2009, I stocked up for Christmas, but because the elections had to travel into a second round, patronage was very poor and I ran at a loss, so this time, I wanted to wait and find out what the outcome would be.

“Now that the winner has been declared and the NPP has won, it will encourage many people in my area to celebrate, so I have come to stock up in readiness for good patronage,” Nana Yaa Adutwumwaa from Onwe, explained.