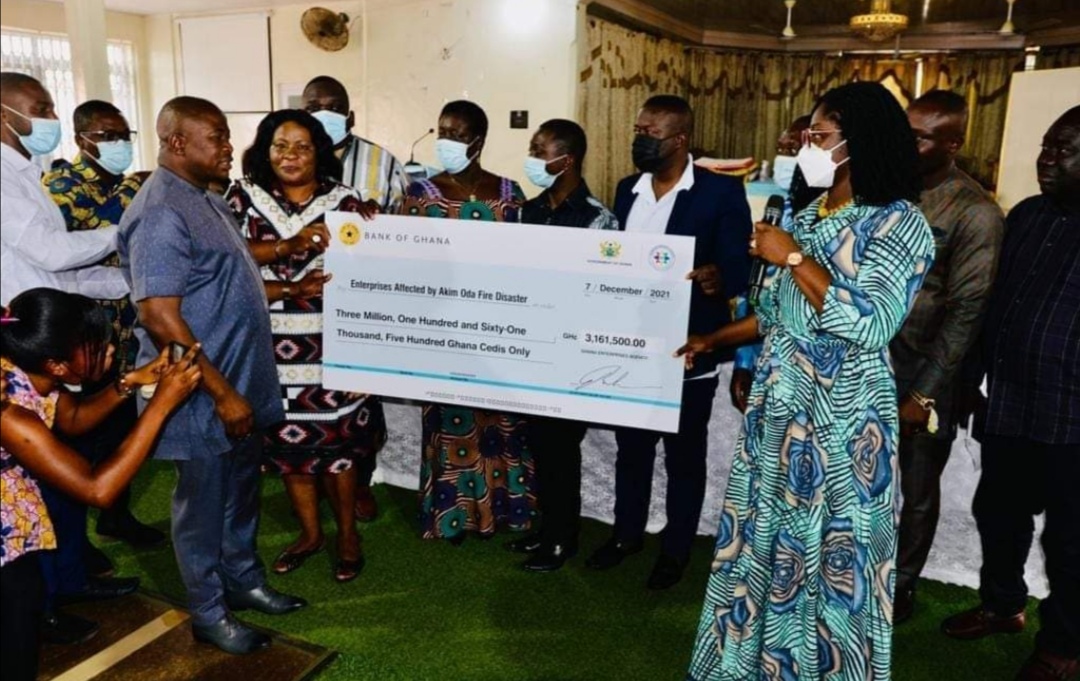 The government has started the disbursement of GH¢3.2 million to the victims of the September 15, 2021 fire outbreak at Oda Central Market in the Eastern Region to mitigate the effects of the incident on their businesses.

The emergency financial support fund is being disbursed through the Ghana Enterprises Agency (GEA) to the 511 victims whose shops were affected by the inferno.

As a result, the CEO of the agency, Mrs Kosi Yankey-Ayeh together with the Member of Parliament for Oda Constituency, Mr Alexander Acquah met with the traders at the start of the disbursement exercise in Oda.

Mrs Yankey-Ayeh, in her speech, stated that the funds were an emergency financial support by the government to mitigate the effects suffered by micro enterprises as a result of the fire outbreak.

“It is my pleasure to address you on this occasion where a support package will be announced to victims of a recent fire disaster at the Oda Central Market.

“On September 15, 2021, the Oda Central Market was gutted by fire, causing substantial damage to traders’ properties. Moved by the disaster, the President visited the scene on October 7, 2021 and stated that the government was going to provide support to the victims,” she said.

To this end, Mrs Yankey-Ayeh said GEA was tasked by the President to provide the necessary support to the affected victims.

She said on November 1, 2021, GEA initiated the registration processes by liaising with the Oda Assembly NADMO Department and leadership of the market women.

She said an initiation meeting was held with the identified stakeholders to map out a strategy for the registration of affected persons.

“Data on the fire victims was collected from all the stakeholders and harmonised.

“The registration process was robustly aimed at avoiding double registration and to blacklist fire victims already supported by MASLOC,” she said.

According to her, the GEA Team was able to come up with a harmonised number of 511 fire victims of which 67 per cent of them were female and 33 per cent male.

“Finally, we are here today to pronounce the support. The President directed upon our recommendation to support you with an amount of GH¢3.2 million.

“On this note, I wish to thank the Oda MP for his immense support and all the stakeholders who collaborated with GEA to this point,” he said.

The CEO reiterated the commitment of GEA to the development of the country through the various support projects and programmes for micro, small and medium enterprises (MSMEs).

“Your pain is our pain and your joy is our joy as well. GEA sympathises with the fire victims and we hope the support will help to revive the businesses and diligently work to grow them for your benefit and in the interest of the nation as a whole,” she added.