Fintechs must partner to increase their value — eTranzact CEO 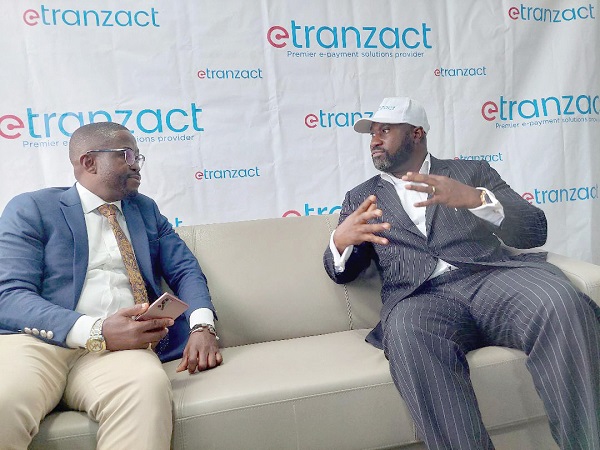 Many companies, particularly in the Fintech space, see themselves as better than their competitors and, therefore, are always inclined to work in silos.

This culture is common in Ghana because of the fear of sharing profits and other oppotunities.

But in a world where technology and innovation rules, the monopolistic idea is seen more as a setback than a win. Many companies in the technology space are collaborating because through that they are able to offer better services to their clients to use their services.

It is against this reason and more that the Chief Executive Officer of eTranzact, Mr John Apea, has called for greater collaborations and partnerships among Fintechs in the country to enable them to grow their value.

He said such a move would also afford them the opportunity to serve their customers better.

Mr Apea, who recently received the nod from the Bank of Ghana to assume his new role, told the Graphic Business in an interview that; “For me, the future of FinTech is collaboration and partnership. It is about time that we seized the opportunity to see how we can work together rather than work in silos”.

He said; “I see a lot of digital information innovation happening within this space. But I think while this digital innovation happens, we should look at ways in which we can consolidate ourselves and find ways of forming partnerships that actually benefit the consumers.

Mr Apea said the technology space was about providing a solution that added value to people and that could be achieved when things were made easier through applications.

Referencing the services that his company provides, he said “if you need to make any transaction and pay your kids school fees, I hope you use eTranzact, for instance, adding that the easy platform provided helps the company’s clients to save time which can be channelled into productivity whether at work or home. Once you do that, you're adding to the economy.”

He said the partnerships among players in the industry was not to work for any other country but for Ghana by providing solutions that work “for us”.

Mr Apea said the introduction of the electronic cedi (E-Cedi) came with some regulation around it and, therefore, for crypto currencies to be used in Ghana, there was the need for some regulation.

According to him, regulation is good to ward off criminal intents and behaviours that do not auger well for the industry and the people.

“You know, as a country, if you care about your citizens you're caring about their well being,” he said.

Mr Apea, however, admitted to the negatives of regulations saying: “on the other hand, there's a downside to regulation. Sometimes regulation moves too slow.”

He said regulation could slow innovation and in a world that was moving fast, as far as technologies were concerned, there was the need for an equilibrium.

So it's about finding that equilibrium between being innovative and regulating the system. So I like crypto. I think crypto can be the future but there still has to be some level of regulation that protects the average citizen from scammers and from people who don't have good intentions,” he said adding that “so I'm all for crypto and the E-Cedi too.”

He said when it came to block chain “I think block chain is a good thing because you're able to authenticate particular transactions, so I think those two are completely separate things.

Mr Apea said while regulators took steps to regulate the industry, they must be able to do so by ensuring that regulations did not stifle innovation.

This will allow players in the industry to move at the same space in competition with the outside world as technology evolves fast.