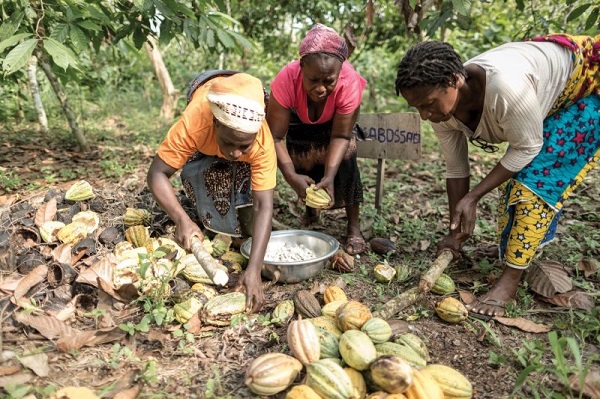 INTERNATIONAL trade in the global south has traditionally been with key agricultural commodities such as cocoa, coffee cashew, among others.

While production cost involves a lot on the part of the farmers (purchase of approved inputs, application of fertilisers, equipment), as well as ensuring that production is sustainable and environmentally friendly, sometimes farmers do not get the right price for their produce to enable them meet their cost of production and earn decent incomes for their families.

This leads to a vicious cycle of poverty with many subsistent farmers living below the poverty line, thus affecting their standard of living.

As a global movement, Fairtrade advocates for fair prices for farmers and workers in order for them to meet their cost of production, as well as earn decent livelihoods to take care of their families. Through Fairtrade premiums, farmer cooperatives are able to come together to support initiatives that build their communities and ensure the provision of essential amenities and social services to complement existing infrastructure.

Through its Living Income Strategy (LIS), which was developed in 2017, Fairtrade, in partnership with its commercial partners, has undertaken several programmatic interventions that ensure that the root causes of poverty are addressed for smallholder farmers.

On the other hand, the Living Wage strategy (LWS) for hired labour workers also ensure decent wages for workers while also advocating for decent working conditions and the respect for rights of workers.

In 2020, Fairtrade published its first Living Income Progress Report which also outlined initiatives undertaken such as the introduction of farm records to build the entrepreneurial skills to improve farm profitability.

Through the roll-out of the LIS, Fairtrade and its commercial partners, together with producer organisations, have introduced projects that help to strengthen these organisations, while also committing to increased volumes and market opportunities for their produce.

Projects such as the West Africa Cocoa Programme have helped farmer cooperatives build strong systems in the areas of governance, internal management systems and financial management.

Trainings received from Fairtrade have enabled producers to also create Village Savings and Loans Associations (VSLAs) that have supported members in their personal situations and in medical emergencies.

Through the VSLA, cooperatives offer low interest credit to members. Some cooperatives have further established formal savings and loans companies, while others have also been able to give cash bonus to farmers for the payment of children’s school fees and hiring of labour, among others.

According to the President of Fair Trade Ghana Network (FTGN), Florence Blankson, the important role the network has played in helping members secure market opportunities for exporting their products, as well as the learning opportunities that exchange visits to partner network countries within Africa had brought to the individual cooperatives and organisations that form part of the Ghana network.

Through Fairtrade, the members of the Fair Trade Ghana Network have also received sponsorships to attend international trade shows, conferences, workshops and seminars such as the 2018 World Cocoa Conference in Berlin, Germany and the 2018 Fairtrade Africa Convention in Kenya. Members have also benefitted from various capacity building programmes such as learning visits to the Cocoa Research Institute of Ghana (CRIG). There have also been Business Development training programmes organised for the network funded by Business Sector Advocacy Challenge (BUSAC) Fund; training on Advocacy work to address producers’ concerns on low producer prices; as well as capacity building on Business Organisation & Management and Biodiversity.

On his part, Edward Akapire, Head of Region, Fairtrade Africa West Africa Region, said “Fairtrade has improved the income and living conditions of farmers and workers and we continue to advocate for fair trade as an alternative to the conventional international trade.” - fairtrade.net.