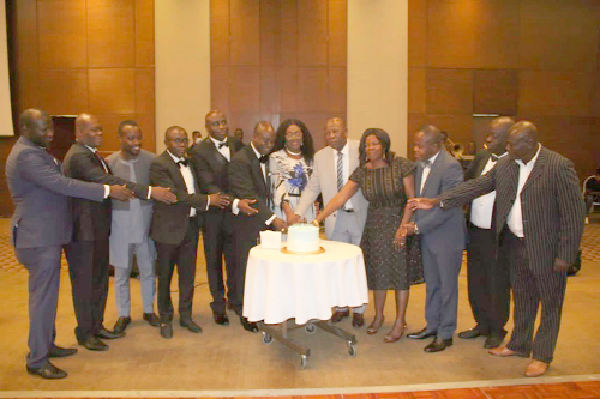 Mr William Adum Addo (6th from left), President of PIWA, cutting the anniversary cake with some members and other players in the pharmaceutical industry

The Pharmaceutical Importers and Wholesalers Association (PIWA), has appealed to the government to exempt pharmaceutical products from the list of products that the reversal of the benchmark discount will affect.

It said the move was necessary to help keep prices of medicines low for the ordinary people to afford basic medications.

According to the association, currently, local production of pharmaceutical products accounted for about 30 per cent.

This means that the country is dependent on more than 70 per cent of pharmaceutical imports to complement what is produced locally.

The President of PIWA, Mr William Adum Addo, who made the appeal in an interview with the Daily Graphic shortly after the association’s fifth anniversary dinner and awards night last Saturday in Accra, explained that with the suspension of the benchmark value discount of 50 per cent on imports, the general prices of medicines would be going up by not less than 50 per cent.

“Medicine is equally important as food so once you make it more difficult for people to afford, it creates hardship for the citizenry and can lead to more avoidable deaths.

“That is why the government should reconsider the reversal of the 50 per cent benchmark discount,” he said.

Mr Addo Adum described his outfit as a major stakeholder in the pharmaceutical industry, adding that the “the efforts of PIWA in Ghana have been put to a great test since the outbreak of the COVID-19 pandemic.

“The Ghanaian importers have gone all lengths to ensure that essential drugs are readily available. PIWA has always ensured the availability of all classes of medicines such as prescriptive, over the counter, equipment and essential medicines in all health facilities.

“As an association, we will continue to offer quality and affordable medicines to the populace,” he assured.

In April 2019, the government drastically reduced the benchmark values for which duties paid by importers at Ghana’s ports are calculated.

The benchmark or delivery values of imports, with the exception of vehicles, were reduced by 50 per cent, while that for vehicles by 30 per cent.

It was also part of reforms aimed at reducing the incidence of smuggling, enhancing revenue mobilisation and making Ghana’s ports competitive as well as boost volumes of imports.

However, after a couple of years of its implementation, the government has proposed for the benchmark values to be reversed.

While some industries in the country have commended the government for the suspension because of its impact on local production, more on the other side, being importers, have kicked against that development describing it as a way of making imports more expensive at a time when local companies do not have the capacity to produce to meet the huge demand.

The event held on the theme: ‘Five Years of Dedicated Pharmaceutical Delivery’, was to climax the fifth anniversary celebration of PIWA , which started earlier this year.

It brought together major players in the pharmaceutical industry to deliberate and solicit ideas to help grow the industry, as well as reward committed members of PIWA for their hard work over the past years.