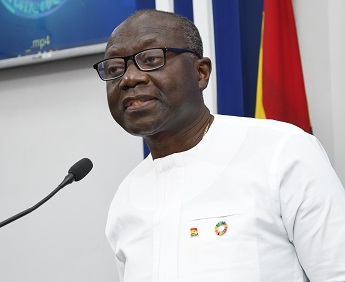 The launch of the Economic Enclave Project (EEP) to cultivate 110,000 acres of land in seven regions sets the tone for a new journey of youth engagement in commercial agriculture.

Under the programme, government will provide support such as clearing and development of land and facilitate access to credit, including the recently approved GH₵500 million from the Development Bank Ghana (DBG).

Speaking at the launch of EEP, Finance Minister Ken Ofori-Atta the key objective is to convert lands into fields that will limit imports and transforms Ghana into a net exporter within five years.

Driven almost entirely by private enterprise and finance, he said government will take full advantage of the opportunities offered by the African Continental Free Trade Area.

It has been dubbed a massive programme of change to how the country organizes production and promotes productivity.

The current EEP model is starting on a 10,000-acre stretch of land around the Kasunya-Nyaphienya area in the Greater Accra Region.

A pilot phase of the current model has commenced with cultivation of 1,000-acres of rice.

EEP is projected to generate over GH₵500 million per annum for private sector actors participating in the project.

Ofori-Atta noted that the Partnership Framework envisages direct market linkages with ongoing Government interventions such as Buffer Stock Company, School Feeding Programme and Government procurement such as supply of food to Prisons, Hospitals and the Security Services.

According to him, government has designed a well-consulted Programme - the Post COVID-19 Programme of Economic Growth (PC-PEG) and the 2023 Budget - to guide Ghana out of the current difficulties.

He explained that the EEP is a critical part of the strategy for ensuring that Ghana transition into an Upper Middle Income economy within a decade.

In partnership with the National Service Scheme (NSS, the project will develop 50,000 acres of land in Kumawu in the Ashanti Region.

Arrangements for similar interventions in Oti, Savanna, Central, Western North and Western Regions, are being pursued to bring the total cultivated lands to 110,000 acres.

Ofori-Atta explained that the EEP complements existing agriculture-based flagships such as the Planting for Food and Jobs and sharpens the focus to promote competitive food import substitution, initially focused on rice, poultry and maize, through commercial and large-scale farming.