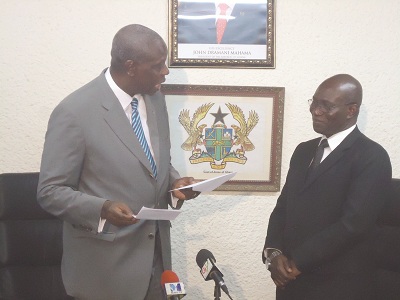 Ecobank Ghana has paid GH¢ 13,766 million as dividend for the 2012 financial year to the Social Security and National Insurance Trust (SSNIT) .

The presentation was made at a brief ceremony held at the boardroom of SSNIT at Pension House in Accra.

The dividend represents about 22 per cent increase over the previous year’s payment.

Last year, Ecobank paid GH¢11,293 million to SSNIT in May 2012, following the bank’s outstanding performance for the 2011 financial year.

Despite emerging as the bank with the biggest loan book portfolio in the country with  GH¢1,396.51 million, Ecobank’s impairment charges stood at  just 5.1 per cent.

It is also instructive that this phenomenal growth in the bank’s loan book was supported by a 53 per cent growth in customer deposits which stood at GH¢2,464.61 million by the close of the year 2012; the highest so far in the industry.

This growth in customer deposits depicts the level of confidence that the public and customers of the bank in particular have in the operations of Ecobank.

The bank’s customer confidence is in part influenced by the bank’s ability to jump to the top of the pack with the biggest balance sheet among 26 universal banking institutions.

By growing total shareholder’s equity from GH¢262.6 million in 2011 to GH¢456.2 million in 2012, and also growing total assets by 61 per cent to GH¢3,428.07 million within the same period, Ecobank has emerged as the sturdiest bank financially and hence, the safest haven for customers’ deposits.

It will be recalled that SSNIT, which was the largest shareholder of the defunct The Trust bank (TTB), transferred its 61 per cent stake to Ecobank Transnational Incorporated (ETI), the parent company of Ecobank Ghana, through a share swap deal. ETI subsequently off-loaded the acquired shares to its local subsidiary, Ecobank Ghana with the aim of building the biggest local bank in Ghana, capable of underwriting big ticket banking transactions in all sectors of the Ghanaian economy.

The very final leg of the merger, systems and operations integration was consummated on June 1, 2012, and by close of year, Ecobank became the biggest bank in Ghana, judging by all the key measures of size.