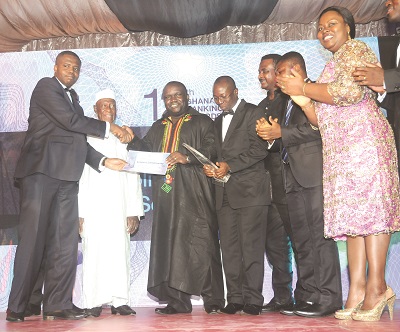 ECOBANK Ghana Limited was last Saturday crowned Bank of the Year 2012 at the prestigious 12th Ghana Banking Awards in Accra.

The bank was also awarded the best bank in Competitive Pricing, and Financial Performance and was the first runner-up under the Best Bank in Corporate Banking category.

Other winners at the ceremony were First Atlantic Merchant Bank, which won the best Bank in Customer Care, and Advisory Services and was the first runner-up under the Best Growing Bank category.

Unibank Ghana Limited emerged as the Best Bank in Short Term Loan Financing, IT and Electronic, and Retail Banking and was the first runner-up under the best Bank Long Term Loan Finance, Consumer Lending, and Corporate Social Responsibility categories.

United Bank of Africa (UBA) and Bank of Africa and were the second runners-up under the IT and Electronic, and Consumer Lending categories respectively. There was, however, no award for the Best in Product Innovation, and Export Finance categories.

The Lifetime Achievement award was conferred on Dr Kobina Quansah, former Managing Director of Barclays Bank, Dr Mrs Stephani Ansah, former MD of HFC Bank, and Mr John S. Addo, a Fellow of the Ghana Institute of Bankers, for their tremendous achievements  in the banking sector.

The ceremony, which was organised by Corporate Initiative Ghana (CIG), was on the theme, “Promotion Ethics, Integrity and Compliance in the Financial Service Sector,” brought together members of the league of banks as well as other businesses across the country.

The Executive Secretary of CIG, Mr Afotey Odarteifio, in his address, said the initiative was to acknowledge, from the stakeholders perspective, the best performing banks in selected  categories, and give public recognition to them.

In a speech read on his behalf, the Minister of Finance and Economic Planning, Mr Seth Emmanuel Terkper, expressed the hope that the awards would help to promote competitive spirit, diversity of products and services, and efficiency in providing services to customers as well as resolving conflicts in the banking sector.

The Executive Director of Ecobank, Mr George Mensah Asare, in his remarks, pledged the company’s continuous improvements in its products and services to its clients.

The Managing Director of Graphic Communications Group Limited, Mr Kenneth Ashigbey, in his remarks, urged banks to show interest in investing in the local economy by coming together to identify the needs of the unserved  population.