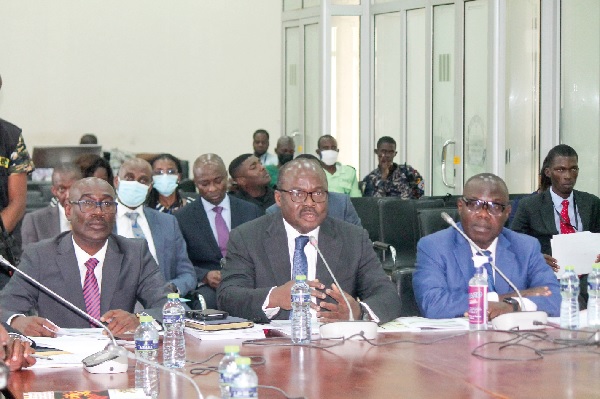 The Governor of the Bank of Ghana, Dr Ernest Addison, has said that the rumour about the domestic debt exchange programme triggered the sharp depreciation of the Ghana cedi against the US dollar last year.

“I’m sure you recollect that in October, there were rumours about the debt exchange; so this is what triggered a large depreciation of the cedi. Individuals who were holding bond instruments tried to rediscount their instruments. They got the cedis and they immediately invested in holding US dollars.

“So that pressure on the market drove the exchange rate to 15/16 (cedis for a dollar), and as soon as there were signals that we were going to conclude on the staff level agreement with the IMF, people started getting out of their dollar holdings, and really that’s when the currency also appreciated during that period,” he said.

Mr Addison said that in response to a question at the Public Accounts Committee (PAC) of Parliament sitting in Accra yesterday.

This was when the BoG appeared at the PAC for the consideration of the Report of the Auditor General on the Consolidated Statement of Foreign Exchange Receipts and Payments of the central bank for the year ended December 31, 2020.

It was also to consider the Report of the Auditor General on the Statement of Foreign Exchange Receipts and Payments of the BOG for the half year ended June 30, 2020.

Mr Addison told the committee, Chaired by the Deputy Minority Leader and Member of Parliament for Ketu North, Dr James Klutse Avedzi, that the cedi was now between 11 and 12 cedis to a dollar.

On why the cedi was depreciating again, he said the market was a flexible one and would reflect movements on a day-to-day basis.

“If there is additional demand for cedis, the currency would reflect it. The central bank cannot fix the exchange rate; it depends on what transactions have taken place that week, and maybe there have been payments to contractors, and typically that type of payments can move the exchange rate because some of them immediately convert that into foreign exchange,” he said.

He said the exchange rate reflected a lot of day-to-day pressures on the economy.

Mr Addison said the BoG did not have enough foreign exchange reserves, and that currently, there was around 1.5 months of import cover, but the government had announced a debt standstill which meant that the outflows - money that was being used to service foreign debt - would not go out any more.

That, he said, gave the country a lot of room and took pressure off the foreign exchange market.

He expressed the hope that because of the debt standstill, “I can say that we should expect the currency to remain relatively stable”.

Earlier, the Deputy Minister of Finance, Abena Osei Asare, asked by the Chairman of the Committee about what the ministry was doing to ensure that all ministries, department and agencies (MDAs) used the Ghana Integrated Financial Management Information System (GIFMIS), she said the government was looking at upgrading the system.

That, she said, was to ensure that every expenditure that was made by MDAs or a metropolitan, municipal or district assembly (MMDA) was done on the system.