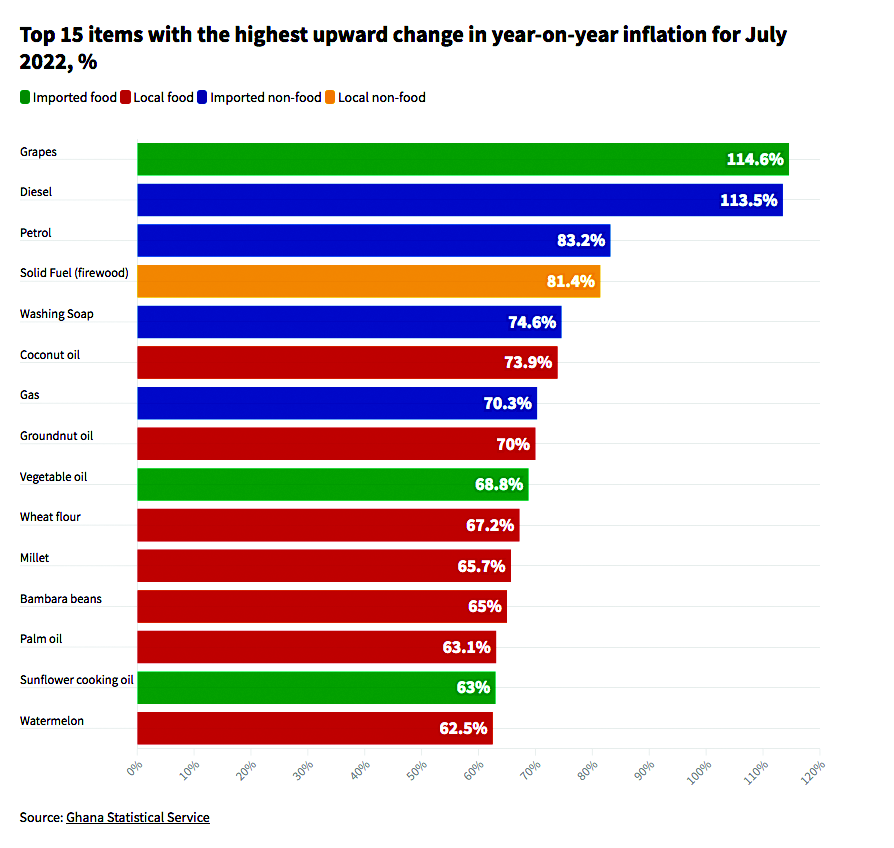 As Ghana’s fiscal and debt vulnerabilities worsen amid a difficult external environment, a deal with the IMF is likely to improve investors’ confidence.

Ghana is suffering from its highest inflation rate in 20 years, with a rise to 31.6 per cent during the month of July, according to a recent statement issued by the Ghana Statistical Service.

In recent months, food and fuel price rises and supply-chain shocks resulting from the war in Ukraine have severely impacted the country’s already vulnerable economy, necessitating talks with the IMF on a seventeenth bailout.

The price of diesel has more than doubled in one year, while petrol has increased by 83.2 per cent, provoking a hike in transport costs, with a rollover effect on the price of basic commodities.

Households in Ghana now deal with higher prices of imported and local food items: grapes, cooking oils, wheat flour, millet, Bambara beans, and watermelon are at least 50 per cent more expensive than last year. The prices of solid fuels such as firewood or charcoal increased by more than 80 per cent between 2021 and 2022.

The current energy crisis has a twofold effect on Ghana. As oil is the second most exported product in Ghana – $2.71bn in 2020 – after gold ($5.93bn) and before cocoa beans ($1.28bn), the country’s petroleum industry is benefiting from the global surge in oil prices.


In the first half of 2022, the only revenue which exceeded the government’s budgetary assumptions was oil revenue, while cocoa production declined sharply compared to last year.

Paradoxically, however, Ghana relies heavily on refined oil imports for its domestic consumption. The only refinery in the country, Tema Oil Refinery, has a limited capacity of 30,000 barrels per day (bpd), whereas the country produces approximately 170,000 bpd of crude oil designated for exports.

This reliance on imports is exacerbating a precarious economic situation fuelled by high state spending prior to the COVID-19 pandemic.

Although inflation is a global phenomenon – the US inflation rate has almost quadrupled in the past two years – it has disproportionally affected Ghana since the start of the Ukraine war.

Apart from Nigeria, in which inflation rate rose by 18.6 per cent in June, other West African countries have experienced a much lower rise in the prices of goods. The inflation rates of Togo and Côte d’Ivoire, two of Ghana’s neighbouring countries, rose by only 5.4 per cent and 6.8 per cent respectively during the month of June.

“Even though countries are subject to similar economic shocks, they are experiencing different effects because of the pre-existing condition of the state of the economy before the shock hit,” the assistant professor of economics at Niagara University in Toronto, Dennis Nsafoah, explained.

In the case of Ghana, the country’s fiscal position was already a challenge before the COVID-19 crisis hit, with a debt-to-GDP ratio of 64 per cent in 2019, the reason being that, at the time, the government entered a phase of substantial public spending.

Two major fiscal policy measures have weighed on the government’s budget deficit: the clean-up of the banking sector, which saw a reduction in the number of banks, and the abolition of fees for senior high school, meaning that costs for education were assumed by the government for students between 15 and 18.

“The government’s strategy was to push the economy to reach certain objectives, which were to benefit the population in the long run, but they could not have anticipated the successive economic shocks that were to come,” says Mr Nsafoah.

“These programmes have eliminated Ghana’s fiscal space, and the country was thus severely hit by the economic downturn resulting from the Covid-19 pandemic.”

According to the IMF, Ghana’s public debt increased from 65 per cent to 80 per cent of GDP during the global pandemic.

“The government’s fiscal efforts to preserve debt sustainability were not seen as sufficient by investors, leading to credit rating downgrades, non-resident investors exit from the domestic bond market and loss of access to international capital markets,” says the Washington-based institution.

In addition, Ghana’s currency, the Cedi, has lost 47.1 per cent against the dollar since the beginning of the year, making it the worst-performing currency in Africa after Zimbabwe’s dollar, and contributing to the inflation of imported products.

How to counter rising inflation?

In response to an ever-increasing budget deficit, the Central Bank of Ghana has sold foreign assets to support the economy.

As a consequence, Ghana’s net foreign assets went from $3bn in May 2021 to a negative value of $126m in May 2022, according to the Bank of Ghana’s last monthly monetary survey.

Traditionally, Ghana’s balance of payments has experienced a current account deficit. In recent years its financial and capital account has remained relatively high as a result of foreign portfolio investment and foreign direct investment, mainly in the country’s cocoa, gold, and petroleum industries. However, about three months ago, Ghana’s capital account figures went negative as a result of the sales of all of its international reserves by the Bank of Ghana.

“This is not sustainable. The Bank of Ghana cannot replicate this model for the next half of 2022, or it will run out of international reserves, which will scare a lot of investors,” Mr Nsafoah argued.

“It is time for the fiscal government, namely the Ministry of Finance, to find a way to go on the international market and borrow on its own, instead of relying on the Bank of Ghana,” Mr Nsafoah said.

But because Ghana has missed its budget target several times in recent years, credit-rating agencies have constantly downgraded the country, making it difficult to attract investors.

On August 10, Fitch Ratings downgraded Ghana to CCC from B-, right after S&P lowered Ghana’s local and foreign currency credit ratings to CCC+/C from B-/B.

In response, the government said credit-rating agencies were preventing the country from accessing global capital markets.

“We are disappointed by S&P’s decision to downgrade Ghana despite the bold policies implemented in 2022 to address macro fiscal challenges and debt sustainability,” Ghana’s Ministry of Finance said at the time. — African  Business