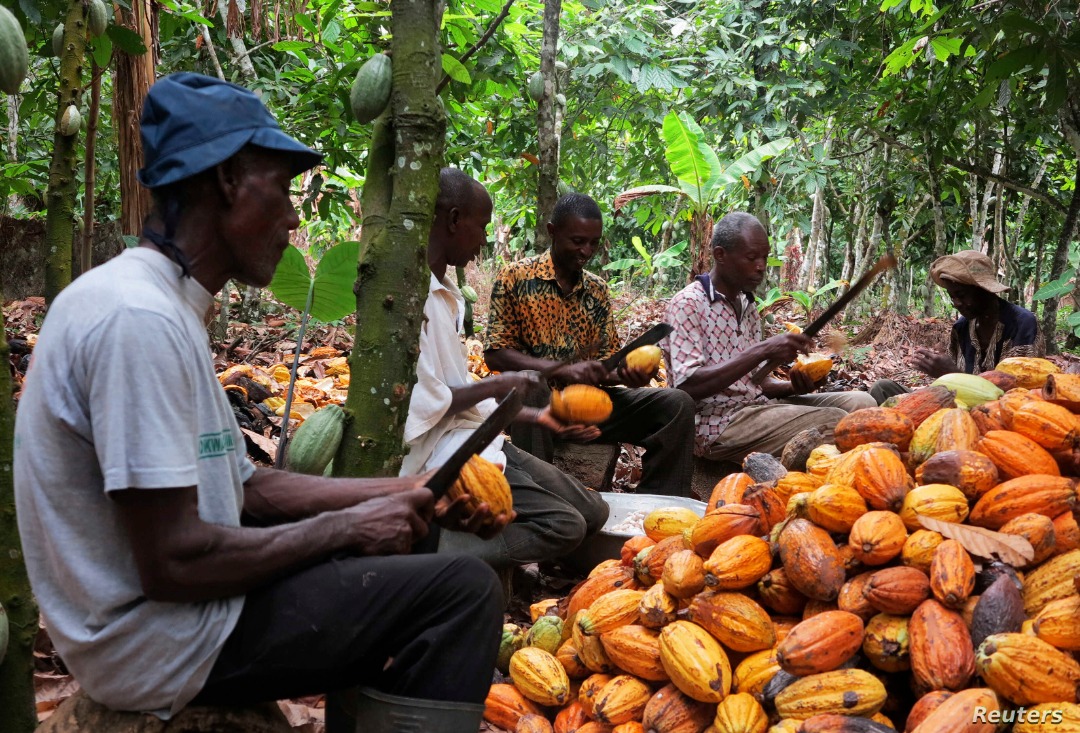 IN SPITE of being the second largest producer of cocoa and the only supplier of premium beans in the world, Ghana’s cocoa output per acre leaves much to be desired.

At an average of 450 kilograms (kg) per hectare, equivalent to about three bags per hectare, Ghanaian cocoa farmers labour more to reap half of what their counterparts in Indonesia, the third largest cocoa producer, earn from the same piece of land. There, yields per hectare average 800kg, according to TechnoServe, a non-governmental organisation (NGO).

Beyond limiting the value that the country derives from the golden pod, low yields per hectare are a credible threat to the existence of the cocoa industry in Ghana:

It makes cocoa farming an expensive venture. This becomes a push factor that can drive cocoa farmers into comparatively higher earning ventures such as rubber and cashew farming, which utilise the same land as cocoa, to the neglect of cocoa production.

Low yields also discourage the youth from engaging in cocoa farming and that elevates the risk that the high numbers of aged farmers in the business pose to the sustenance of the industry.

Conscious of these, the Ghana Cocoa Board (COCOBOD) has, over the years, undertaken various initiatives to help raise output per hectare to appreciable levels, attract youth into cocoa farming and boost the incomes of farmers.

Its cocoa extension services have been praised by private sector stakeholders as a unique farmer support scheme that helps to boost yields and maintain Ghana’s bean as premium quality.

In 2017, the board also rolled out the Productivity Enhancing Programmes (PEPs), a bouquet of initiatives that aimed to increase yield, reduce cost of operations and make cocoa farming more attractive.

However, for PEPs to succeed and deliver its intended objective, farmers needed to embrace it and become the medium through which the programme’s initiatives were delivered. This is where cocoa farmer groups and cooperatives came in handy.

From groups to cooperatives

A part of the Ghanaian culture, cocoa farmer groups or associations are a collection of farmers who unite to advance the course of their businesses.

The groups are born by friendship but mostly expand to comprise farmers in the same catchment area who share a common interest and see the wisdom in forging together to achieve same.

Given the power that groups and associations provide in the area of effective mobilisation, dissemination and utilisation of information, COCOBOD saw the need to empower and formalise them into cooperatives to be able to effectively utilise them.

Consequently, its Cocoa Health and Extension Division (CHED) started a training programme for the active groups while encouraging their leaderships to register with the Department of Cooperatives.

The registration was necessary to ensure that the groups became legally recognised entities of farmers working to improve the economic status of their members.

As of June, this year, COCOBOD data showed that 512 of such cooperatives were registered with total membership of 101,796 farmers.

Now, after almost two years of ground work, COCOBOD is set to give formal recognition to these cooperatives through a national launch of the Farmer Cooperatives in the Cocoa Sector on July 11.

A recognition by COCOBOD is key for various reasons; it makes them a critical part of the board’s PEPs and other initiatives through which inputs can be distributed to help avoid the recurrent issues of theft and diversion.

In the area of agronomy, COCOBOD could easily outsource its cocoa swollen shoot virus disease (CSSVD) control and replanting programmes to the cooperatives to execute at a fee.

Financial institutions will also be comfortable dealing with the cooperatives. Through this, the bureaucracies that individual farmers face when accessing funds could be a thing of the past.

Moreover, a robust cocoa farmers’ cooperative scheme is a prerequisite to a successful migration of COCOBOD’s inputs supply value chain to the private sector - an initiative that the board is at the verge of implementing.

Already, the Board has outsourced its replanting programme to the Sefwi Bekwai Youth in Cocoa Association, one of the cooperatives in the Western North cocoa region, the Head of the Public Affairs Department of COCOBOD, Mr Fiifi Boafo, said in an interview.

Instead of outsourcing the replanting aspect of the rehabilitation to some agriculture institution, management decided to outsource that to this group and they are doing marvelous well, he said.

This serves as income generation for the group and its members. It is also an avenue for knowledge sharing to the benefit of the farmers.

But in spite of the enormous benefits that cooperatives offer the farmers and the industry in general, not all the groups and associations have transitioned into this novelty.

COCOBOD’s data further showed that about 830 groups and associations, comprising about 45,068 farmers, were yet to be registered as cooperatives.

This leaves much to be desired.

At a time when COCOBOD and its Ivorian counterpart are fighting to protect farmers’ incomes through the historic institution of a floor price and the living income differential, it behooves farmers to be strategic by joining the board to boost yields in their farms.

Higher yields mean higher income and that goes a long way to improving the livelihoods of their families.

It is, therefore, hoped that the national launch of the Farmer Cooperatives in the Cocoa Sector in the Ashanti Region this Thursday would help encourage the remaining groups to also register their groups to be able to enjoy the benefits that await thems.

Through that we could be inching back to the one million tonnes, which has eluded us after we chalked it up in the 2010/11 cocoa season.