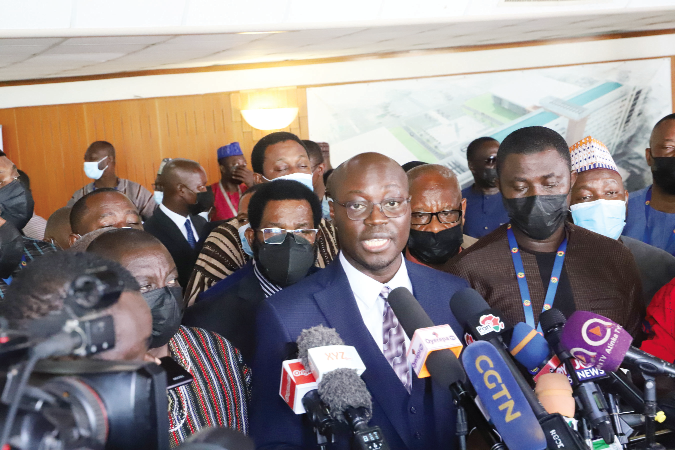 The Minority in Parliament says the 2022 Budget and Economic Statement is not responsive to the most pressing concerns that have wobbled the Ghanaian economy into serious crisis, causing Ghanaians to bear the brunt of economic mismanagement.

It said it had hoped that the terrible state of the economy would compel the government to propose policies in the budget that addressed unsustainable debt, hardships, the high cost of living, fiscal indiscipline, arrears clearance, unemployment and the misuse of public funds.

“To our surprise, and that of the good people of Ghana, the Akufo-Addo-Bawumia government has failed to show clear signs that it has the solutions to these problems in this budget, which shows that the government aims at increasing tax revenue by GH¢25 billion in one single year,” it said.

Addressing the press to react to the 2022 Budget and Economic Statement presented by the Minister of Finance in Parliament yesterday, the Ranking Member on the Finance Committee, Dr Cassiel Ato Forson, said Ghanaians were now left entirely to their fate and had to brace themselves for even more severe hardships going into Christmas and the New Year, as the budget did not respond to the most important issues affecting them.

“We call on the Vice-President, Dr Mahamudu Bawumia, to walk his lofty talk in opposition and clean up the mess he has created in the Ghanaian economy to ensure that an immediate end is brought to the hardships and sufferings of our people. We must admit that his policies have failed and the economy is in crisis,” Dr Forson said.

The MP for Ajumako-Enyan-Esiam said the Minority was aware that the government owed arrears of about GH¢30 billion, yet it had apportioned only about GH¢1.9 billion in the budget for the purposes of arrears payment.

Besides, he said, there was wastage in public resources, as GH¢3 billion had been allocated as expenditure to be spent at the Office of the President.

“We want to serve this warning that we in the Minority will demand the breakdown of this expenditure, and that until the Minister responsible for National Security appears before us to answer to the question relating to the President’s travel with a private jet, the Office of the President’s budget will not be approved by us,” he warned.

On debt sustainability, the MP said per the Finance Minister’s projection, Ghana’s public debt stood at GH₵341.76 billion as of September 2021.

The amount, he said, marked an increase of GH¢221.76 billion over the GH¢120 billion the current government inherited in 2017, with a debt-to-GDP ratio of 56 per cent.

“This huge increase is as a result of borrowing occasioned by a record 15.6 per cent deficit and a primary balance of 8.8 per cent in 2020.

“The huge and unsustainable debt overhang has led Ghana to lose access to the international financial market due to total loss of confidence in our ability to meet further debt service obligation,” he said.

He indicated that the Minority had expected that the 2022 budget would show clear signs of how the government intended to reduce the public debt and regain the confidence of investors.

“Unfortunately, the budget presented by the Finance Minister does not show much hope on how to achieve that. In view of that, we project that the public debt will hit GH¢355 billion by the end of December 2021, representing 82 per cent of GDP, which is the highest since HIPC, and the budget indicates that the situation will worsen in 2022, as the public debt will reach GH¢426 billion at the end of 2022, representing 85 per cent of GDP,” he said.

Touching on unbearable hardships facing most Ghanaians, Dr Forson said those hardships stemmed directly from the high cost of living, constant increases in the prices of basic items, fuel price increases and excessive taxation by the government.

He named the taxes that had been levied on Ghanaians since 2017 as the five per cent increase in VAT, the introduction of the luxury tax levy and three per cent VAT flat rate, sanitation tax, the five per cent national fiscal stabilisation levy, which should have expired in December 2017 but was extended indefinitely, making it a new tax.

“Together with other non-tax revenues sources, the government received GH¢249.3 billion in tax revenue alone from January 2017 to September 2021, added to the GH¢221 billion in debt that it has borrowed.

“This government has over GH₵461 billion at its disposal, but, unfortunately, these resources have been squandered on misguided consumption expenditure, especially in the 2020 election year, creating a huge hole in our finances,” he said.

“In a desperate bid to plug these holes, the Bawumia-led economic management team has sought to impose more suffering and pain on the ordinary Ghanaian by punishing them with additional taxes and other fiscal measures in the budget aimed at raising additional tax stock of GH¢15 billion,” he added.

Dr Forson disclosed that the new tax that would be imposed on Ghanaians in 2022 was the introduction of the electronic transaction levy, which would affect mobile money transactions, bank transfers and inflows in remittances.

“What this government seeks to do is that from January 2022, every single remittance from anybody living abroad to his or her relatives will attract tax, and this is not acceptable,” he said.

However, defending the budget on the floor of Parliament, the Majority Leader, Mr Osei Kyei-Mensah-Bonsu, was optimistic that 2022 budget was a watershed one that was set to give Ghana "a new beginning to break away from the past"

He said the coronavirus pandemic (COVID-19) had effected considerable devastation on the economy as businesses had collapsed and people had lost their lives and jobs, therefore, the 2022 budget would deal with the realities.

"Mr Speaker, there are many initiatives contained in the budget and the minister has indeed not shied away that there is downside to our development agenda.

"This budget is not a propaganda budget and that is why it is not a green book," he stated.

Also, the Deputy Majority Leader, Mr Alexander Afenyo-Markin, briefly addressing the media outside Parliament, justified the electronic levy, stressing that its introduction in the budget was intended to achieve two major things -- to make funds available for contractors to be paid regularly and to support the Youth Entrepreneurship Support Programme.