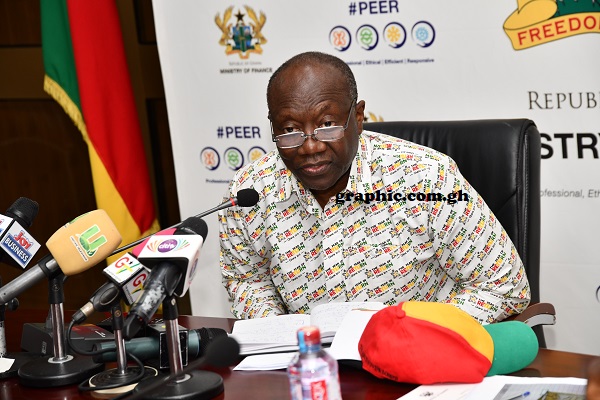 Next year’s budget and economic policy direction of the government will be anchored on three key areas — digitalisation, skills training and entrepreneurship.

The three areas, which are integral parts of the Ghana COVID-19 Alleviation and Revitalisation of Enterprise Support (CARES) ‘Obaatan pa’ programme, are expected to help the citizenry, especially the youth, put their innovative ideas into practice and create their own jobs, sources close to the Ministry of Finance have disclosed.

Today, the Minister of Finance, Mr Ken Ofori-Atta, will present the 2022 Budget Statement and Economic Policy of the government to Parliament.

The budget will also spell out new programmes, economic policy interventions and projects that the government wishes to undertake next year.

The sources said the minister would present a carefully worked out plan that would enable the government to achieve a balance of raising more revenue, boosting the entrepreneurial skills of the youth and spending more on critical infrastructure such as roads, schools and health facilities, without jeopardising the fiscal situation; that is, piling up more debt and spending more than the revenue mobilised (fiscal deficit).

The balance is needed to ease the cost of living on the citizenry, while stimulating economic growth.

The budget, according to economic and financial pundits, must also raise the confidence of investors in the government’s ability to guide the economy out of the COVID-19-induced turbulence.

In a statement issued yesterday, the Ministry of Finance said the budget would primarily focus on expanding the recovery of the economy from the COVID-19 pandemic, as well as creating a climate-friendly entrepreneurial state to address unemployment and import substitution.

“Digitalisation of the economy, skills development and entrepreneurship will also feature prominently in the presentation,” the statement from the Public Affairs Department of the ministry confirmed.

The sources told the Daily Graphic that the government aimed at leveraging digitalisation to revamp revenue collection, stimulate entrepreneurship among the youth and also address challenges in the delivery of public services.

On entrepreneurship, they said special funding schemes would be announced under the GH¢100-billion Ghana CARES programme to support businesses, especially those operated by the youth and females, to revamp their operations and employ more.

The Ghana CARES is a GH¢100-billion post-COVID-19 programme to stabilise, revitalise and transform the economy to create jobs and prosperity for Ghanaians over a three-year period.

With the stabilisation (first phase) completed in 2020, this year and next year mark the second (medium-term revitalisation) phase that will run until 2023.

It will also support small and medium enterprises (SMEs), particularly those into production and information and communications technology (ICT).

Already, scores of business and citizen groups have voiced their displeasure with the frequent increase in fuel prices in the year, the persistent joblessness and the rising cost of business operations and called for sustainable measures in the budget to address them.

On the other hand, investor confidence in the country has been challenged, leading to an increased sell-off of its bonds and a record rise in the premiums demanded by investors on Ghana's foreign bonds in the international market.

The development peaked last month, reflecting the growing concerns over Ghana's debt and fiscal deficit levels and investor confidence in the government’s ability to turn the situation around.

Yaa Kuffour Senyah, Dickson Worlanyo Dotse and Abigail Kortiah sampled the views of some workers in the informal sector, with many clamouring for policies that would translate into lower prices of goods and services.

Some traders in the central business district (CBD) of Accra too expressed worry about the current state of the economy, given the rising cost of goods and services in the country.

A teacher who also trades in the CBD, Ms Doris Adwoa Yeboah, said she anticipated that the budget would increase workers’ salaries, especially teachers, due to the current economic situation.

A driver, Mr Paul Amankwaa, was worried about the frequent rise in the prices of fuel and pleaded with the government to slash petroleum taxes.

“We use all our profits to buy fuel, so we plead with the government to reduce taxes on fuel, so that we can make some profit to support our families,” he said.

An onion seller, who identified herself only as Celestine, also called on the government to help.

A Professor of Economics, Professor Peter Quartey, and an Economic Researcher, Dr Said Boakye, told the Daily Graphic in separate interviews yesterday that the fiscal pressures required that the country find innovative ways to mobilise revenue without compromising on the recovery.

They said increased revenue was needed to reduce the pace of debt growth.

On how to rake in more revenue, Dr Boakye, who is the Head of Research at the economic think tank, the Institute for Fiscal Studies (IFS), said the government should review agreements in the extractive sector to help increase revenue.

He also urged it to be bold enough to review downwards compensation for public workers, as evidence showed that Ghana was paying more to public sector workers.

“Although workers say their pay is low, the ratio of compensation to total revenue shows that we are paying workers far higher than our peers do,” Dr Boakye said.

Prof. Quartey, who is the Director of the Institute for Statistical, Social and Economic Research (ISSER) of the University of Ghana, said he expected the government to lower the deficit target to around eight per cent of gross domestic product (GDP), while aiming to grow the economy by about five per cent.

In this year’s budget, the government plans to grow the economy by 5.1 per cent and register a deficit of 9.5 per cent of GDP.

In the run-up to the budget, a reduction in the benchmark values for imports has engendered a banter among various economic players.

While the Ghana National Chamber of Pharmacy (GNCP) and the Ghana Union of Traders Associations (GUTA) want the government to maintain the discount on the benchmark values of imported pharmaceutical products, the Association of Ghana Industries (AGI) wants them scrapped, especially on products with domestic production capacity.

The benchmark value discount was introduced in April 2019 following persistent complaints and agitation among the trading public on the high cost of clearing cargo at the ports.

It was also meant to lower tariffs and duties to ensure compliance trade as a result of what the government said were issues of under-invoicing, under-declaration, mis-description and over-invoicing, leading to massive revenue loss from the ports, and further reduce alleged smuggling.

The reversal of the policy was expected to take effect last Monday, but it was cancelled, awaiting the presentation of the budget.

The GNCP said the measure was needed to keep prices of medicines affordable, reduce the medicine bill of the National Health Insurance Authority (NHIA) and save the government some money.

In a statement released yesterday, the chamber said the local pharmaceutical industry was unable to meet demand, resulting in the importation of about 70 per cent of products to supplement local supplies.

“The impact will result in the high cost of healthcare delivery, with its attendant cost implications on the National Health Insurance Scheme (NHIS) medicines bill,” the GNCP said.

GUTA, in collaboration with the Joint Business Consultative Forum, said it would be insensitive and discriminatory for the government to heed the demands of some members of the private sector to cause the reversal of the policy, especially in an era when businesses were in serious distress as a result of high interest and exchange rates.

At a joint press conference in Accra last Monday, the President of GUTA, Dr Joseph Obeng, said reversing the policy would make invoice values on imports, including port fees and charges, go up astronomically.

“The cumulative duty, in addition to other rates, such as value Added Tax (VAT), prior to the introduction of the policy, amounted to 55 per cent, and a reversal would mean that the status quo is being restored, as items such as canned tomato paste, which presently attracts invoice value of 35 per cent, will see an increment to about 65 per cent of invoice value,” he said.

Dr Obeng said the policy was enjoyed by all sectors of the business community, including those in manufacturing who imported nearly 90 per cent of their manufacturing inputs.

The Chief Executive Officer (CEO) of the AGI, Mr Seth Twum Akwaboah, responding to the claims, said the association had not hidden its agenda for the reversal of the policy.

The AGI, he said, felt the policy was wrong, as it had gone to make imported products cheaper, thereby killing the local industry, which is an enabler of jobs.