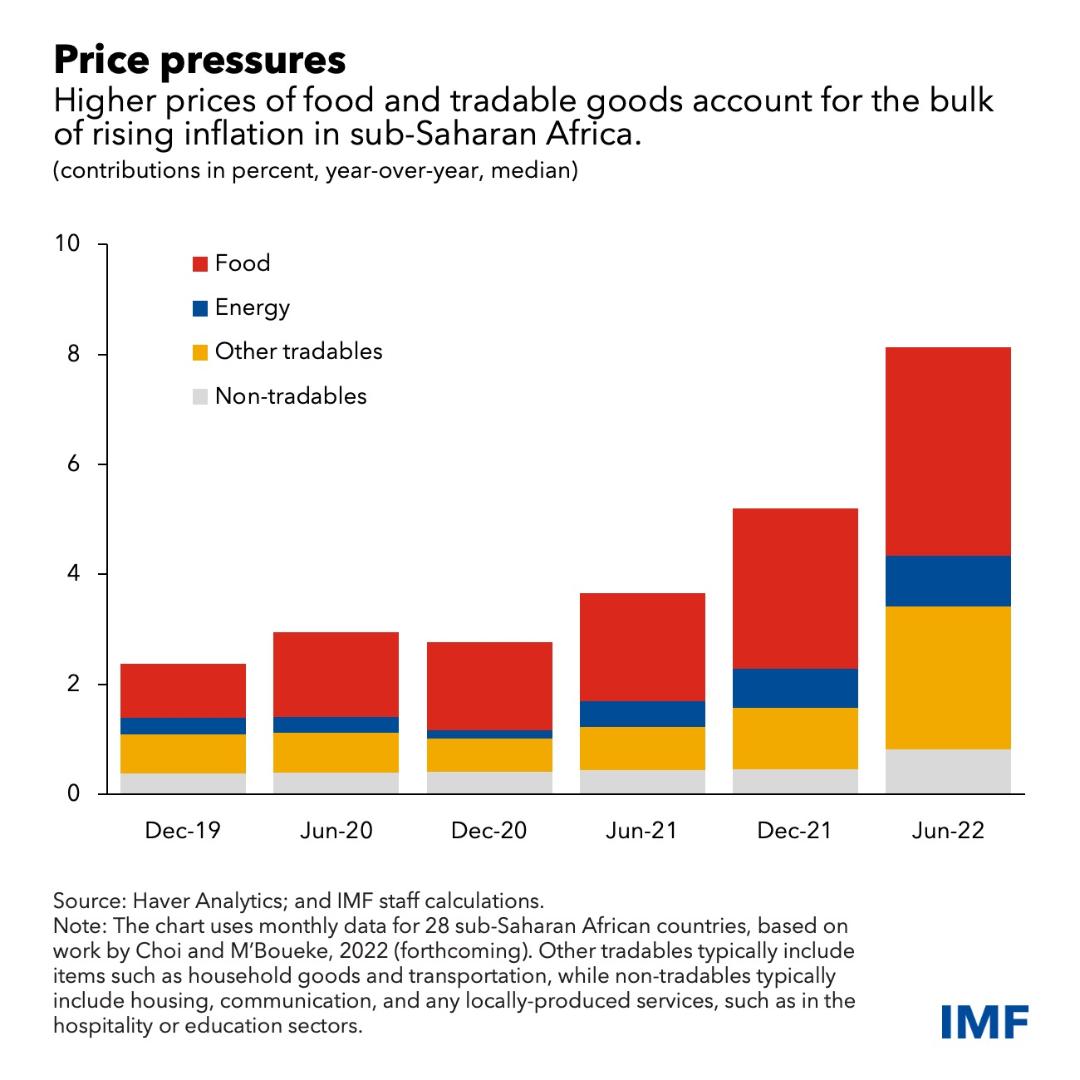 Sub-Saharan Africa faces one of the most challenging economic environments in years, marked by a slow recovery from the pandemic, rising food and energy prices, and high levels of public debt.

One of the most urgent issues confronting the region is the need to tackle decade-high levels of inflation—which are devastating incomes and food security—while also supporting growth.

While there are big differences between countries, the median of inflation rates in the region increased to almost 9 percent in August.

And even though the rise has been less dramatic than in other parts of the world, and the drivers are different, inflation is nearly double pre-pandemic levels, risking social and political instability and worsening food insecurity.

Despite a rebound last year, the fallout from the pandemic has kept domestic economic activity in sub-Saharan Africa relatively muted, and we expect growth in the region to slow this year.

Most countries in the region have lacked the resources to support and stimulate growth, in sharp contrast to richer countries elsewhere that could inject trillions of dollars into their economies.

In sub-Saharan Africa, inflation has been driven less by domestic activity than in advanced economies. Instead, external developments have shaped the path of inflation since the start of the pandemic.


They include the sharp spike in global commodity prices, swings in the exchange rate, global supply chain disruptions, and natural disasters. 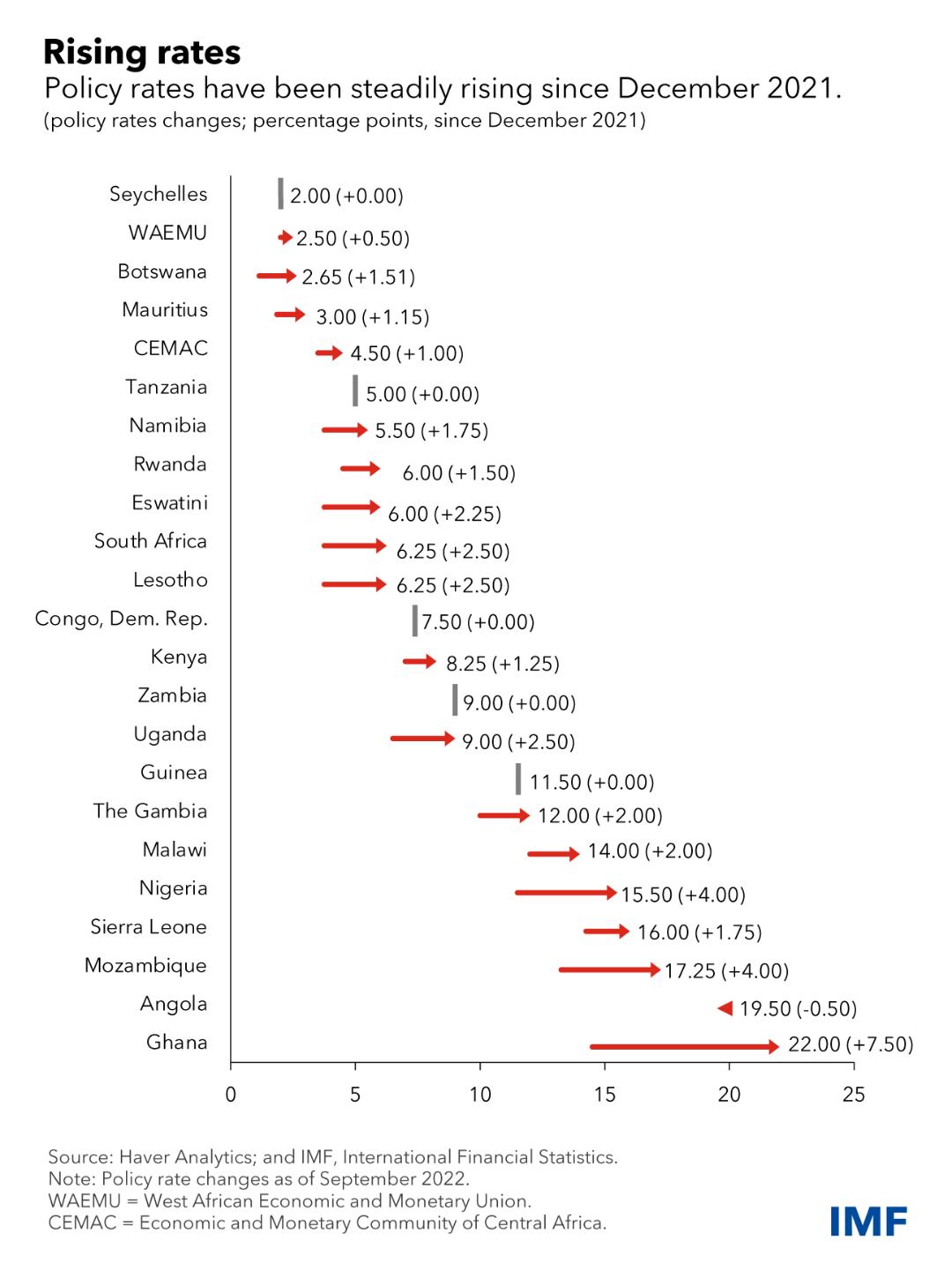 In the case of food, the prices of key staples such as maize and wheat have increased since 2019, contributing two-thirds of overall inflation in fragile states and one-half elsewhere in the region.

Higher global energy prices and the strong dollar have also fed through to inflation indirectly, via transportation and tradable goods like household products.

By contrast, there have been only modest increases for the prices of goods and services that most reflect domestic demand pressures, so-called nontradables—which typically include any locally-produced services, such as in the hospitality, health, or education sectors.

With food and energy accounting for half of household consumption in sub-Saharan Africa, living costs across the region have spiraled. The IMF estimates that 12 percent of the region’s population will face acute food insecurity by the end of this year.

Many countries have therefore turned to subsidies and tax cuts to alleviate the squeeze in household incomes. These measures should be temporary and as well targeted as possible to maximize their impact and minimize their costs on already-stretched budgets.

Examples include Ghana, Malawi, Mozambique, Nigeria, Uganda and the economic and monetary unions for both Central and West Africa.

That means central banks should proceed with caution and raise interest rates gradually so as not to jeopardize the recovery. But policymakers must also not be complacent: countries where domestic demand pressures are acute, or inflation is very high may need to tighten faster or more decisively.

The same applies to countries where monetary policy credibility is weak, the currency is depreciating rapidly, or foreign exchange reserves are shrinking.

While countries with exchange rates that are fixed or heavily managed have, so far, experienced lower inflation than those with more flexible regimes, their ability to control the pace of interest-rate increases is constrained by their currency arrangement.

There are some concerns that monetary policy could still be too accommodative, given that rate increases have not kept pace with inflation. Policy coordination can help.

Fiscal consolidation has a role to play in countries where policy is too loose, as can a combination of rate increases and currency depreciation .

Given sub-Saharan Africa’s fragile recovery, combined with the fact that domestic demand pressures have not so far been an important driver of inflation, policymakers must proceed with caution in coming months while closely monitoring inflation.