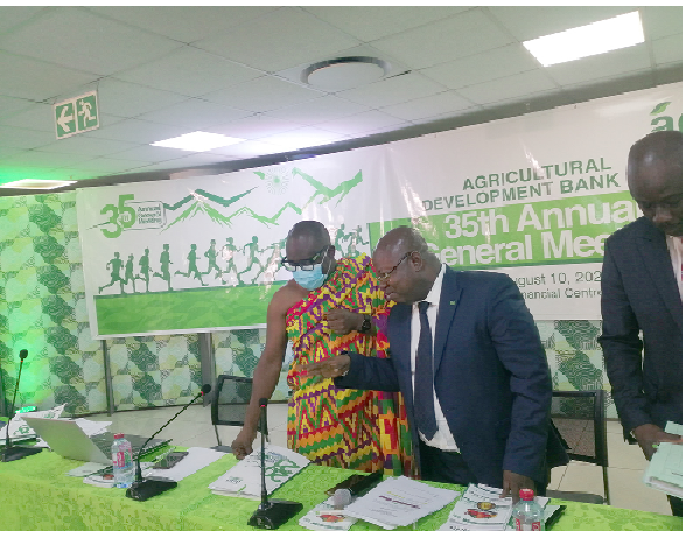 This represents over 24.8 per cent growth, leading a return on equity and return on assets of 12.09 per cent and 1.81 per cent respectively.

Addressing the 35th annual general meeting (AGM) of the bank in Accra on August 10, Chairman of the Board of Directors, Daasebre Akuamoah Agyapong II, said the bank was more profitable, although the economy was yet to fully recover from the coronavirus (COVID-19) pandemic.

“Esteemed shareholders, I am pleased to note that although the economy was yet to fully recover from the ravages of the pandemic, year on year, the bank was more profitable, posting a profit after tax of GH¢81.6 million.

Daasebre Agyapong said the bank’s target was to bring the NPL ratio within industry brackets by 2023.

“The bank also added two more branches to its network at University of Ghana, Legon, Accra and Wisconsin University Campus, Hatso, Accra, thus, increasing its network from the previous 82 to 84,” he said.

According to him, the bank deepened its financial intermediation in the agricultural sector in 2021 in line with its strategic objective to significantly increase the share of agricultural loans to the bank’s total loan portfolio.

He explained that a lot more focus was given to the provision of loans to meet working capital and capital expenditure needs of players in the agricultural value chain not excluding animal and crop farmers, aggregators, agro-processors, agro-marketers and input distributors.

“To provide ready market for farmers financed by the bank and those operating under the Planting for Food and Jobs Campaign, the bank in 2021 approved an amount of GH¢160.0 million as working capital to the National Food Buffer Stock Company Limited to procure the produce from farmers for supply to critical national institutions such as Senior Secondary Schools and for storage as food buffer,” he said.

The MD said the bank in 2021 continued to be an active partner for the implementation of the One District One Factory Programme (1D1F).

He said as at year-end 2021, the bank had approved a total of GH¢113.87 million in respect of 18 viable projects to undertake among other things, broiler production and processing, fruit processing, general manufacturing, construction, jute bags production as well as fish farming and processing