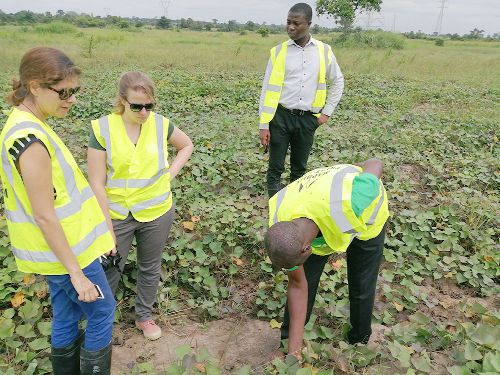 Mr Felix Yao Kamassah (right) uprooting some sweet potato from the farm. With him are Mrs Ines Bastos (left) and other officials from MTG
30.5k Shares

Maphlix Trust Ghana (MTG) Limited has begun a search for strategic investors to help establish a $6million factory in the Ketu North District in the Volta Region to process about 20 million tonnes of sweet potatoes every year into various derivatives for both the local and export market.

According to the company, a feasibility study on the project has been completed with a grant from the African Development Bank (AfDB). MTG is also ready with more than 446 acre farmland, planting materials and a land to site the factory, adding that all things being equal, the project should commence this year.

The Managing Director (MD) of MTG, Mr Felix Yao Kamassah, who disclosed this to the GRAPHIC BUSINESS on July 18, in Dzodze in the Volta Region, observed that the MTG was hopeful it would soon find an investor to start operations.

“As soon as we get the required amount, we will secure equipment and use the rest as working capital for the project to start because we are ready as I speak.

Market and environmental assessments on the project have already been completed,” he said.

He said MTG had engaged the services of out-growers to start the cultivation of the sweet potato.

The MD stated that the factory when operational would process sweet potato into derivatives such as baking flour, biscuits, chips, cakes and animal feed.

That, he said, would help reduce the importation of sweet potato derivatives into the country which often put huge pressure on the local currency.

Asked whether the One District, One Factory Secretariat had shown interest in the project, Mr Kamassah answered in the affirmative but explained that the secretariat was yet to give feedback after it shared MTG’s proposal with some banks.

The interview coincided with a visit of a team from COLEACP which visited MTG Farms at Dzodze in the Volta Region to familiarise themselves with operations of the company.
COLEACP is a non-profit inter-professional association, representing and defending the collective interests of Africa, Caribbean and Pacific (ACP) producers/exporters and European Union (EU) importers of fruits, vegetables, flowers and plants.

Its specialised information and advisory services are open to all ACP companies in the horticultural export sector and are financed by the European Commission.

The company’s objectives are to enable ACP companies to comply with European food safety and traceability requirements, and to consolidate the position of small-scale producers in the Africa, Caribbean and Pacific horticultural export sectors.

COLEACP is currently providing the needed technical assistance to aid Maphlix Trust Ghana to access Global GAP Certification and also help it find an investor for the potato factory project.

A Regional Programme Manager of COLEACP, Mrs Ines Bastos, who spoke to the paper after the visit, said the team was satisfied with the level of infrastructural improvement on the farm.
Based on the level of improvement, she stated that the team was now in a better position to recommend the sweet potato factory project to investors.