The newly-elected Vice President of the World Armwrestling Federation (WAF), Mr Charles Osei Asibey has paid a courtesy call on the Minister for Youth and Sports, Mr Mustafa Ussif at his office in Accra.

The visit which took place at the Ministry was meant to formally introduce the President to the Minister and thank him and the ministry for supporting the elective Congress and the National Armwrestling Team, Golden Arms to compete in the just ended Africa Armwrestling Championship in Lagos, Nigeria.

President Osei Asibey recounted his journey to assuming the high office and acknowledged the support given to him by the government including the sector minister and his ministry. 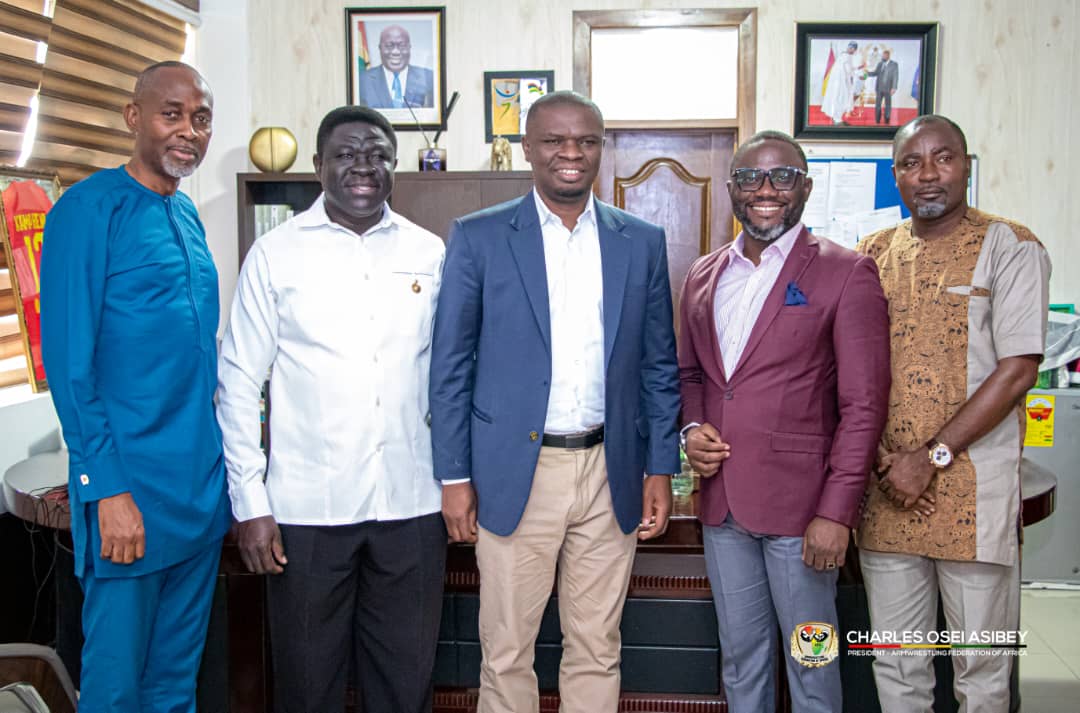 “I remember informing you weeks ago; the intention to contest for the presidency of the continental body and you encouraged me to go for it, because it was in line with government’s policy of getting more Ghanaians to take up leadership roles at the continental and world level.
It was through your encouragement and support from my Board that pushed me to go and thankfully, I won by 73 per cent of the total votes cast,” Mr Osei Asibey narrated.

He added that the Golden Arms, also through the ministry’s support won 45 medals, 18 of them were gold, 22 being silver and four bronze medals to finish third on the medal table.

The AFA President who is also the President and Founder of GAF, also thanked the Minister and the Africa Union Technical Committee together with the Local Organising Committee (LOC) for the 2023 Africa Games for adding armwrestling as a sports code for next year’s Games.

“I have repeated severally that Armwrestling will win not less than 10 gold medals at the Africa Games because we know our strength and capacity on the continent. I am using this opportunity to ask you to extend some of the support you will give to the other sporting disciplines to armwrestling, and we will never disappoint,” he stated.

On his part, the Minister, applauded the President and his entourage for bringing honour to the country and assured him of government’s continuous support to make him succeed.

“Your success is a success for Ghana likewise your failure so although there are challenges, we will still see what we can do because this achievement puts Ghana at the right place to ensure development of the sport,” he said.

AFA and GAF Veep, Mr Kofi Addo Agyekum, thanked the minister for taking time off his busy schedule to meet with them and asked the minister to use his office to give them the needed opportunities across the continent to accelerate the promotion and development of the sport.