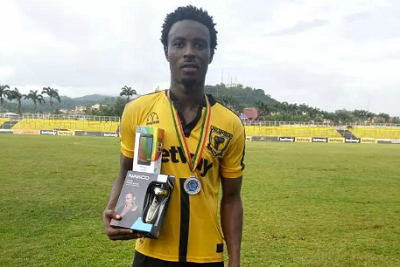 The Chief Executive Officer of AshantiGold SC, Fred Acheampong, has revealed to the Graphic Sports that his outfit is ready to release only Safiu Mumuni to Kumasi Asante Kotoko to boost their CAF Confederation Cup campaign but not all the players the Porcupine Warriors had requested

described as false, claims that AshantiGold were being uncooperative following a transfer request made for the release of Mumuni and other players to help Coach Charles Kwablan Akonnor’s side.

Mr Acheampong noted that agreeing to release all the players Kotoko requested would weaken the Obuasi-based side for future competitions.

According to him, Kotoko earlier made a request for striker Shafiu Mumuni via telephone whom Ashgold agreed to offload but demanded an official letter in connection to the player’s transfer.

He explained that Kotoko first made the request via telephone following which AshantiGold asked them to make the request formal. However, when the letter was delivered, management of Kotoko made a request for two additional players [Richard Dodji and James Akaminko] which the Miners believed would weaken their setup.

“We were prepared to release Shafiu Mumuni but they rather rejected the deal claiming we were unprofessional. We can only give them one player three because that will destabilise our team and affect our performance. We are also building a team for competitions so we cannot release all three players at the same time,” Mr Acheampong said.

Last week, the chief executive of Kotoko, George Amoako, said the club had ended their pursuit of the AshantiGold players, the club’s president, Dr Kweku Frimpong, also described as unprofessional on the part of AshantiGold for granting interviews on the deal while negotiations were still ongoing.

Meanwhile, Coach Akonnor has expressed his disappointment at the refusal of AshantiGold to release striker Mumuni and midfielder Akaminko to reinforce his squad for the continental campaign.

He said his former employers’ hardline posture on the transfer request had compelled him to shut the door on the duo and look outside the country for talents to reinforce his team.

“I wanted those two Ashgold players because I believe they will help me strengthen the team to achieve my goal. I prefer to recruit players in the country but if we are not successful we will be forced to look outside the country,” the coach told Graphic Sports.

“The issue is that I know those players. I have worked with them before and they know what I want so it will make my work easier. They know my philosophy and my style of play so I need not spend time training them all over again. Also, we don’t have enough time to register new players,” he lamented.

“We have made a move for another player from one of the premier league clubs but even that one is not a done deal but once they release him, we will grab him. I can’t tell you his name until the deal is sealed. We are also talking to a Burkinabe striker.”

Despite the difficult transfer negotiations, Akonnor is looking forward to his team’s group campaign with high expectation as he leads the team to Omdurman to face Sudan top side, Al Hilal on Sunday.

“We have a tough group but we have to make sure we come out victorious. We will do the necessary checks on the teams, work things out and qualify because that is the target.”

Sunday’s encounter will be the third clash between Kotoko and Al Hilal since they last met in the 2004 Confederation Cup with Kotoko running away victorious in the two previous clashes in 1990 and 2004.