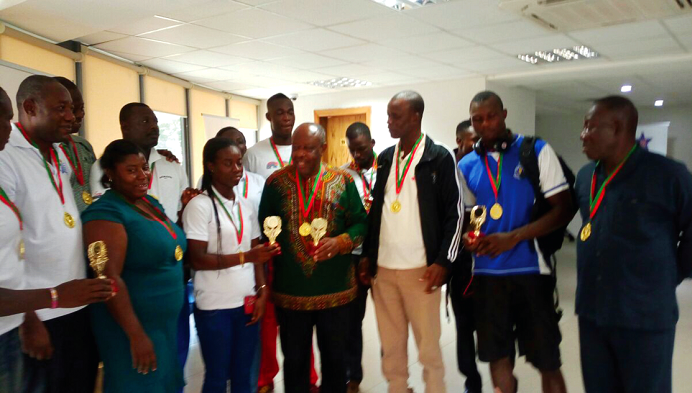 Players and officials of Black Spikers interacting with the CEO of StarOil, Mr Kaledzi, during the visit..
30.5k Shares

The management of StarOil Company has pledged to support Ghana Volleyball in the country and its activities following the gold medal winning feat chalked up by the senior national male and female teams, the Black Spikers, at the just-ended Confederation of Africa Volleyball (CAVB) Zone III tournament in Burkina Faso.

StarOil donated GH¢2,000 for the team prior to the its departure to the competition and the CEO of the company was excited to see the gold medals hanging around the necks of the players when they paid a visit to the company to present their trophies and awards last Thursday.

Mr Vincent Kaledzi lauded the team and assured them of the continued support of his outfit.

He said StarOil was committed to the development of volleyball in the country and, therefore, advocated more seriousness towards the sport by all interested parties.

The president of the Ghana Volleyball Association, Paul Atchoe, thanked him and pledged that  would continue to thrive with the company’s support.