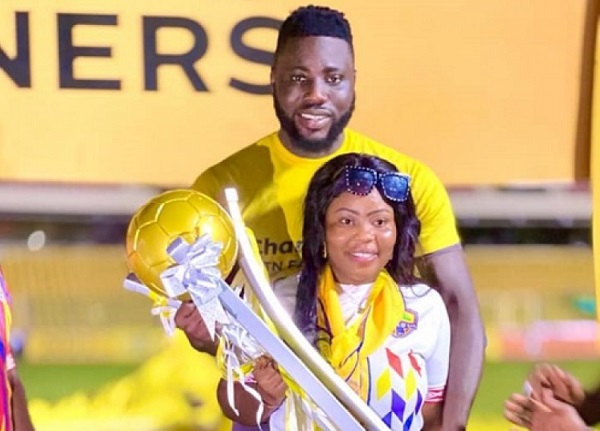 Accra Hearts of Oak goalkeeper, Richard Attah has apologised for comments made by his wife against the management of the club.

Joyce Attah, wife of the goalkeeper alleged that two Directors of the club which she nicknamed “Aki and Pawpaw’ masterminded the sacking of former coach Samuel Boadu from the club by interfering in coaching decisions and manipulating matches.

Mrs Attah in a widely circulated audio (below) which made the rounds last week on social media said the two unnamed officials of the club told referee Selorm Yao Bless who was in charge of a 1-1 draw between Hearts of Oak and Kumasi Asante Kotoko earlier this season to hand red cards to two players of Hearts.

She alleged that the reason was for Hearts of Oak to lose the game, which would lead to the sacking of Samuel Boadu.

Mrs Attah who said her husband informed her of the happenings within the club, further alleged that as part of the ploy, Attah was dropped from the starting XI for that match and replaced with substitute goalie Richmond Ayi at the eleventh hour.

Attah has not featured for the former African champions since he earned a Black Stars call-up for the FIFA World Cup playoffs against Nigeria last year.

After the club on Friday threatened legal action if Mrs Attah was unable to substantiate the allegations in seven days, her husband has now apologised to the Board Chairman, management and fans of the club for her comments.

"I want to take this opportunity to render an unqualified apology on behalf of my wife and my family for comments made when addressing her fellow phobians regarding my non-selection during matches for our darling club," Attah posted on Facebook.

"Please let's forgive and let go as we forge forward together with a common goal. She never meant to tarnish the image of the club or anyone associated with the club. She has since regretted and has promised not to engage in anything that will bring the name of the club into disrepute.

"I will like to apologize to the Board Chairman for the dent on the image of the club. Apologies to the board members, management and fans of the club. I say a big sorry to my teammates, like I always say teamwork is the goal. "Trust the Process". Apologies to former Coach Samuel Boadu for every comment made about him in that audio. He has always been my friend and adviser and I will always hold him in high esteem".

Attah also apologised to current Hearts coach Slavko Matic who his wife accused of dropping the goalkeeper for being overweight.

He added that he had no problems with the club and was currently negotiating a contract extension.

"To my current coach, I say sorry. Thanks for believing in me and letting me know that with hard work I will surpass my potential. He has always been an encourager," he posted.

"I want to state that, I do not have any problem with the club. I am happy here. It is not true that my contract with my darling club has been terminated and I have no intention of terminating it. We are even on a contract extension talks.

"The love for the club is unflinching and I always appreciate what the club has helped me to achieve. I appreciate the Executive Board Chairman, Togbe Afede XIV who happens to be like a father to me. In all. Kindly forgive my wife for her comments. She has promised not to repeat that again".