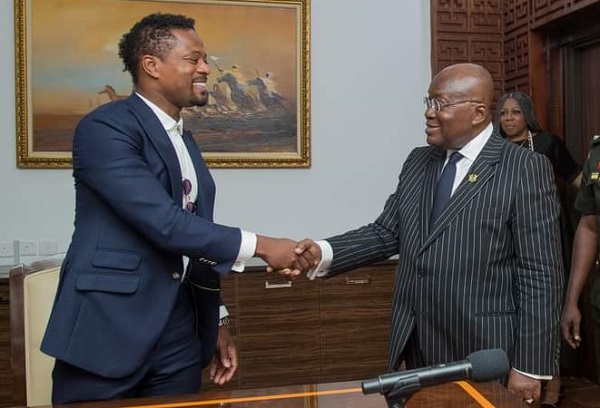 President Nana Addo Dankwa Akufo-Addo has described French football star, Patrice Evra, as a powerful ambassador for Africa for his outstanding career, the strength of his personality and a commitment to help bring change to the continent.

He indicated that the change was not just about the image, but also the reality and substance of the life of the people because that was what mattered the most.

President Akufo-Addo stated this when Evra, a former captain for both Manchester United and the France national team, paid a courtesy call on him at the Jubilee House in Accra yesterday.

The Senegal-born football star is in the country in partnership with Chipper Cash, an African cross-border payments company, to rally support for the 2022 FIFA World Cup and to raise funds for the football supporters to cheer their countries at the November 20 – December 18 tournament in Qatar.

Evra, who had already been to Senegal, Cameroun and Nigeria, had dedicated himself to change the image of Africa, from that of a poverty-stricken continent to one where the youth would have the confidence to stay in their countries and make it in life.

President Akufo-Addo said it was encouraging that sporting greats such as 41-year-old Evra, despite all the successes they had chalked up in their careers, continued to have the commitment to the collective welfare of Africa, noting that it was reassuring and a tremendous example for all the young people.

Evra, who won five English Premier League titles with Manchester United and two Italian Serie A crowns with Juventus, noted that though he was born in the Senegalese capital of Dakar, he opted to play for France where he grew up as a child after his family settled there.

“But I understood the politics later; When you win you are a French, but when you lose you are a Senegalese player,” he added.

He said although Africa had an image of a poverty-stricken continent, it was endowed with a lot of talents, deep creativity and rich resources.

“I am not here only with Chipper Cash but also here to interact with people to enhance the image of Africa”, he said, and added that he had also embarked on a project dubbed : ‘Ending Violence Against Children’, and intimated that he would soon have discussions with the leadership of the World Health Organisation.

Now a coach, since ending his playing career in 2018, Evra said he was also in the country to help raise funds for Ghana’s participation in the upcoming World Cup as part of a goal to see an African team win the global trophy.