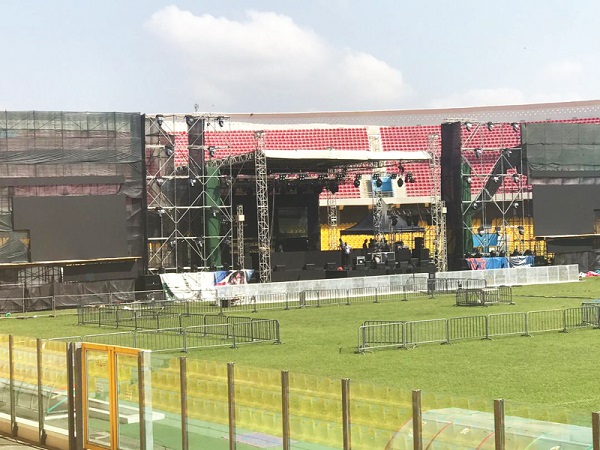 In the last two weeks, the National Sports Authority (NSA) has been at the receiving end of intense criticism for sacrificing the Ghana Premier League for a musical concert that not only disrupted the elite domestic football competition but could compromise the physical condition of the football pitch.

Justification for their action has not gone down well with the public even though the NSA makes a strong case that it needs to raise revenue outside sporting events to shore up its internally generated funds to effectively manage the facilities under its care.

Worried about the negative publicity around the concert, Guaranty Trust (GT) Bank, organisers of the event, went on a charm offensive to mitigate the damage done to undo the negative impact on its brand, insisting the bank would ensure that the stadium was not left worse off after the concert.

The NSA may have brought trouble on itself for the poor manner in which it handled the whole affair, its failure to hold consultation with key stakeholders in the football industry with its misleading communication that the stadium would be closed down for routine maintenance. However, outrage and public outcry followed a viral video that showed heavy duty equipment on the playing field as the rostrum was being erected for the concert.

Certainly the NSA, managers of all state stadiums, had lied to the public about the real reasons behind the closure. The revenue from rental of the facility, although undisclosed, looked too good to be ignored by the authority.

The brouhaha occasioned by the rental of the stadium for non-sporting activity, and the manner in which the managers of the facility handled the situation, bring to the fore the failure of the NSA to effectively manage facilities under its care to derive full commercial value from them.

As part of its mandate, the NSA is expected to ensure the stadiums under its care are used for both sporting and such commercial activities that bring in additional revenue to take care of their maintenance. Over the years, however, it has not been able to effectively discharge its mandate due to internal weaknesses and the lack of a clear facility user policy.

Last season, the Baba Yara Stadium was closed down for massive renovation and Asante Kotoko and King Faisal were forced to use alternative venues for their home matches (Kotoko honoured most of their home matches in Accra before opting for Obuasi in the latter part of the league). It followed a similar exercise at the Accra stadium at a huge cost to the taxpayer, as the Ministry of Youth and Sports fell on the central government for financing.

Presently, the Essipon Stadium in the Western Region, one of the host venues for the 2008 Africa Cup of Nations tournament, is in ruins awaiting massive renovations financed by the government. It is a sad state of affair and an indictment on the NSA’s capacity to manage stadiums profitably.

While the Director-General of the NSA, Prof. Peter Twumasi, is quick to point to the establishment of a marketing unit to oversee the commercialisation of the facilities, its record is nothing to write home about and the authority’s internally generated funds unable to support effective maintenance of the stadiums.

At the end of the 2008 Nations Cup, the Ministry of Youth and Sports promised to ensure the four stadiums which were built from commercial financing would be effectively managed to generate profits to offset the loan and ensure it was well maintained.

Back in 2008, the NSA, headed by Mr Prince Oduro-Mensah fought off a proposal to get private firms with expertise in property management to run the facility on its behalf, insisting the NSA had the competence to manage the stadiums profitably. However, the record over the last 13 years shows a lack of capacity to run these facilities profitably.

A few years ago, the NSA generated good revenue from renting out the Accra stadium to some faith-based organisations for their annual conventions and watch-night service, making more money from those commercial ventures than they could make from their share of gate receipts from league matches — one of their key revenue lines. However, it lost those important clients and has since struggled to effectively commercialise the properties under its management.

In major sporting nations such as the UK, USA or Germany, major stadia are constructed for multi-purpose usage beyond sports to ensure they are managed in a manner that generates profits. Similar considerations informed the construction of the 2008 Nations Cup stadiums in Accra, Kumasi, Essipon and Tamale which have facilities that can be rented out as corporate boxes or for conferences or musical concerts.

However many years on, the NSA’s record shows that it has capacity challenges to manage these facilities profitably and that calls for a policy direction by the government on the management of these sports infrastructure as a business venture to ensure their sustainability.