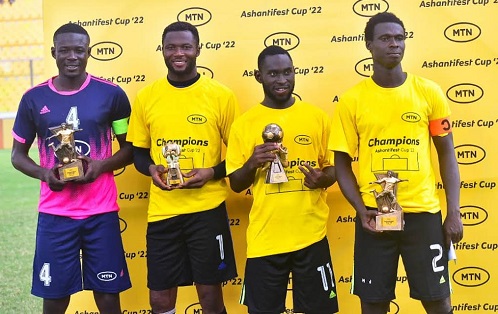 Old Tafo, a community in the Ashanti Region, went home with GH₵20,000 cash after beating Asokwa 4-1 to emerge champions of the Ashantifest Community Soccer Tournament at the Baba Yara Stadium last Sunday.

They were also presented with a trophy, medals and airtime following strikes by Ibrahim Wadudu (hat-trick) and Richard Addai as against a consolation goal for Asokwa through Evans Sarfo.

Before the grand finale, Tech beat Dichemso 2-1 in the third place match and received GH₵5,000 cash, while Asokwa took home GH₵10,000 as runners-up.

Speaking after the match, the General Manager of the Northern Business District, Mr Nii Adotey Mingle, said he was happy about the successful nature of the competition and the quality of the games.

"We look forward to involving more communities and making the event more popular to help unearth talents for the national teams and the Premier League," he stated.

He promised MTN's determination to improve the standard of the Ashantifest to attract the indigenes, both home and abroad, with a higher level of publicity.

"This will boost tourism in the region and help serve a huge economic value to the people in the Ashanti Region,” he emphasised.
The other participating teams were Bantama, Asafo, Suame, Asokwa and Aboabo.