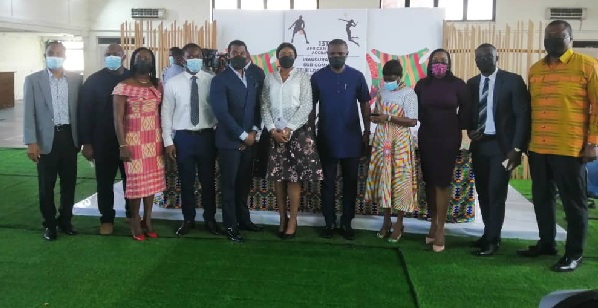 The Minister of Youth and Sports, Mr Mustapha Ussif, has challenged the newly-inaugurated sub-committees for the 2023 African Games to augment the effort of the Local Organising Committee (LOC) in order to stage a memorable event.

Yesterday, seven sub-committees, comprising Marketing and Sponsorship, Media and Communications, Technical, Legacy, Medical and Anti-Doping, Legal and Finance and Ticketing, were sworn in to help organise a successful event.

After leading them to administer the oath of office and secrecy, Mr Ussif said Ghana could not fail the rest of the world because this was the first time in the Games’ 56-year history that the country had successfully defended a proposal it submitted for the hosting of the event.

He reminded the sub-committee members that Ghana would be hosting 55 other countries and about 8,000 athletes “which pose a great deal on us not only to successfully host the Games but also leave a lasting and memorable legacy.

According to him that was the only way Ghana could send a positive signal to the world that it was capable of hosting any international competition.

Prior to the inauguration, the chairman of the LOC, Dr Kwaku Ofosu-Asare, explained that it was part of the requirements to institute 17 sub-committees but the LOC decided to start with these initial seven because of the enormity of their work to the LOC.

He was also grateful to President Nana Addo Dankwa Akufo-Addo for his tireless efforts in ensuring that the protocol needed to authenticate Ghana’s hosting right was achieved.

He also disclosed that work on the facilities to host the Games were ongoing.

Speaking on behalf of the sub-committee members, Mr Andrew Sam, chairman of the Finance sub-committee, who worked in a similar capacity during the Ghana 2008 Africa Cup of Nations, acknowledged the huge task which is much bigger than that of AFCON 2008.

He noted that all the 70 members of the various sub-committees were ready to deliver a world class event and promised to work diligently and excellently to leave a legacy worthy of emulation.