Meet Botsyo Nkegbe: the Paralympian who led an athlete revolt at the 2018 Commonwealth Games 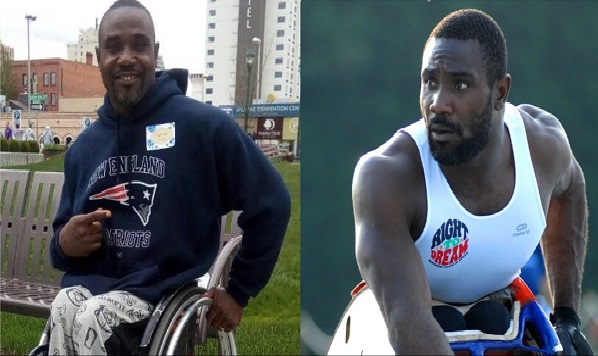 Ghanaian Paralympian Raphael Botsyo Nkegbe is currently waiting to find out which sanctions will be meted out to him after he led an abortive boycott of Ghanaian athletes at the ongoing 2018 Commonwealth Games in Australia.

Nkegbe, the General Captain of Team Ghana for the 2018 Commonwealth Games in Gold Coast, Australia reportedly sent out a rallying call on mobile messaging application WhatsApp to his teammates to get ready for a boycott of the rest of the Games which end on April 15.

His message to the Team Ghana WhatsApp platform called for a boycott if their outstanding bonuses were not paid with immediate effect.

Nkegbe is regarded the most senior of all of Ghana's 71 athletes at the games, with a lot of experience in international competitions having participated three times at the Paralympic Games, All African Games and Commonwealth Games.

Who is Raphael Botsyo Nkegbe

Nkegbe was born in the Volta Region of Ghana in 1978. When he was six-years-old, he contracted polio, which paralyzed his legs. Because of his disability, he dropped out of junior high school. His family moved to Sunyani, Ghana in the early 1990s. Instead of begging on the street, he chose to learn the trade of shoemaking.

Nkegbe began his sporting career as a wheelchair basketball player in the early 90s but switched to para-cycling in the late 90s.

In December 2015, he married his sweetheart, Amdiya Issaka. They both rely on wheelchairs. Raphael and Amdiya are proud parents of three beautiful children.

The government and the Ghana Olympic Committee (GOC) moved in swiftly to avert the impasse by paying the $2,300 dollars owed the Ghanaian athletes.

However, Nkegbe now faces a nervous wait as the GOC has publicly expressed their disappointment about his actions and warned of repercussions.

‘’We - the GOC and the ministry - are disappointed at the action taken by athletes led by Botsyo Nkegbe. We made him the captain because we thought he is a mature and experienced guy, unfortunately, he demonstrated that he is not mature to lead the team," GOC Communication Director, Charles Osei Asibey said in an interview with Joy FM.

"Even though their monies had delayed, I think it was unnecessary to revolt. I must say, going to the extent to encourage athletes not to come back to Ghana is unfortunate.

“We will take a decision on what [Nkegbe] has done. As we speak, every outstanding bonus has been paid to the athletes. We didn’t want them to keep so much money on them. I think the action was planned. We will meet him, find out his reasons for doing that and take the matter up,” he added.