It’s make or break for Galaxies against Sudan 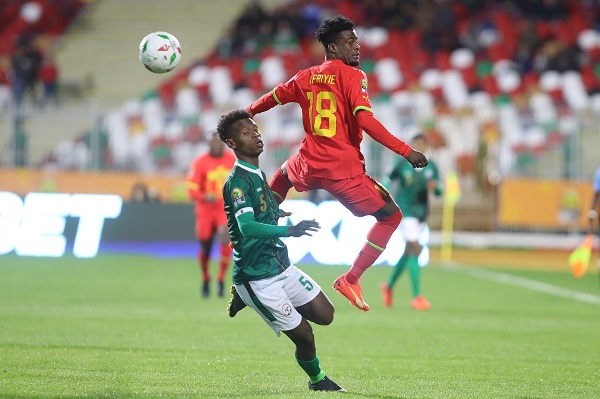 Ghana’s Black Galaxies will have a difficult task of beating Sudan in their second Group C match in Constantine on Thursday in order to progress to the next stage of the ongoing Championship of Africa Nations (CHAN) tournament in Algeria.

The Ghanaians stumbled 1-2 to Madagascar in their opening group match in Constantine yesterday and would therefore walk a tightrope in that crucial game against Sudan on Thursday.

Coach Annor Walker’s men went into the game as favourites against the backdrop of Ghana’s two final appearances in the competition. But after a bright start, they lost control of the midfield and allowed the Malagasies to dominate play.

Just 11 minutes into the game, defender Augustine Randolph slipped and lost possession in the vital area and before the Galaxies defence could regroup, Solomampionpona Razafindranaivo had fired home to put the debutantes ahead.

A minute later, Ghana’s joy over an anticipated equaliser was shortlived when Libyan referee, Mutaz Ibrahim, who had awarded a penalty to Ghana following the trip of Daniel Afriyie Barnieh in the box, later changed his decision upon consultation with the Video Assistant Referee (VAR).

It was a rude awakening for the Ghanaians who started stringing their passes together again but found it difficult to make a headway due to the soggy pitch.

However, Madagascar looked more comfortable on the ball as they began to run at the Ghanaians, forcing them to make mistakes.

But when Ghana finally settled and began to play their normal game, they were presented with the clearest opportunity in the 36th minute but Razak Yussif who had only the goalkeeper to beat ballooned the ball over the crossbar.

Five minutes to recess, Madagascar once again threatened the goal area of the Black Galaxies but goalkeeper Danlad Ibrahim pulled off a spectacular save to deny them from doubling their lead.

Ghana bounced back strongly in the second half as Coach Annor Walker withdrew skipper Gladson Awako for Seidu Suraj and Sylvester Simba which helped Ghana to contain Madagascar in the midfield battle.

But just when Ghana seemed to be finding their rhythm, Randolph gave away another cheap goal in the 62nd minute when he lost the ball to Tokinantenaina Randriatsiferana to slot home the second goal.

Sensing danger, Coach Walker immediately replaced Randolph with Augustine Agyepong who made an instant impact in the 68th minute when he made a long run on the flanks and sent in a deep volley over the Madagascar goalkeeper, who was off his line, into the net.

Ghana wasted several chances in their quest to get the equaliser as they appeared jittery in front of goal.

During added time, the Black Galaxies came close to scoring again when Barnieh fired from close range, but the goalkeeper pushed the ball into play only for David Abagna to fire the rebound off target.