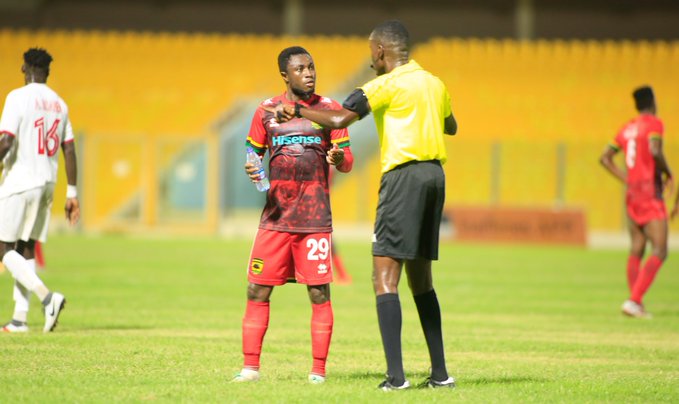 Kumasi Asante Kotoko on Sunday laboured to a 1-1 draw against Techiman Eleven Wonders in their Premier League opener at the Accra Sports stadium.

Kotoko were the front runners going into the match following some exhilarating performance in the offseason but their offseason form didn’t translate into a win against the Techiman based side as they threw away a lead.

Eleven Wonders began the game on a strong foot by piling pressure on Asante Kotoko in the early stages, but Kotoko had Felix Annan to thank for not conceding an early goal.

The Techiman side were denied a fine opportunity to take the lead on 23rd minutes when Yusif Mubarik blocked a Tetteh Nortey goal-bound shot from 15 yards.

The game was evenly spread until with some battles in midfield until the 54th minute when striker Kwame Poku capitalized on a defensive blunder to slot home a low grounder for the opener. A costly mistake between the Wonders defenders and goalkeeper John Mosie.

Kotoko captain Felix Annan drew a spectacular save in the 68th minute after a cross from Wonders' right-wing took a deflection.

Wonders Coach Ignatius Osei Fosu introduced fresh limbs and one of them was the game-changer. Substitute Prince Okraku, on loan from Dreams FC fetched the equalizer for Wonders in the 76th minute after pouncing on a delicious pass from midfield to rifle home.

Kotoko keeper Felix Annan had his view blocked by Yusif Mubarik and the striker fired into the left corner of the post for the equalizer.

Kotoko made a few changes towards the end of the game to bring bite and power up front, but those changes had no significant impact on the game as the referee blew his whistle to end the game.

Meanwhile, two games will be played on Monday, November 16, in Accra. Liberty Professionals will host Bechem United at the Ibrahim Sly Tetteh park in Dansoman at 3 pm. The other game is between Inter Allies and Dreams FC at the Accra Sports stadium at 6 pm.