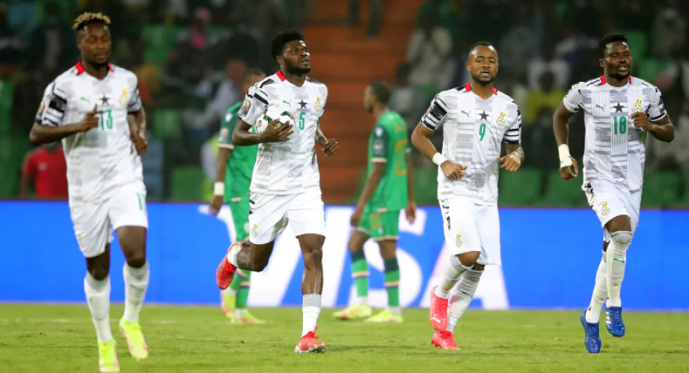 The Black Stars of Ghana have been eliminated from the ongoing 2021 Africa Cup of Nations (AFCON) tournament in Cameroon, having played three group games from which they bagged only one point - a draw and two defeats.

Southern African debutants The Comoros accounted for the Black Stars 3:2 in an eventful encounter Tuesday night to show the wobbly Stars the exit.
Not only were the Black Stars disappointing on Tuesday, their exit also stood as a repeat of an unenviable feat of exiting the tournament at the group stage. The last time it happened was (Egypt 2006), some fifteen years ago, and by a side previously considered the whipping boys of their group.

Ex-Black Stars Skipper Asamoah Gyan summed up the day's humiliation thus: "We didn't play with purpose... We didn't create enough chances, we didn't do anything and then we are going home... People will be disappointed. You have to give the people something to talk (cheer) about, we didn't give anything to talk about. As we are talking I don't know how people are going to feel back home. I'm very, very disappointed we are going out, we shouldn't have gone out. Ghana we know, we didn't see the Ghana we know today."

It was not only on Tuesday that the team failed to sparkle. The Stars failed to glitter in all the three matches they played.

Beyond belief! The Comoros players bound up in jubilation for their historic feat, beating the Black Stars of Ghana. Photo credit: Cafonline.com

They had lost the opening game to Morocco courtesy a goal they conceded in the dying minutes, and followed it up with a one-ll draw against Gabon, conceding the equaliser also in the final minutes. However, there still lingered some hope of advancing, if only the team could win handsomely. Many agreed it was possible playing The Comoros, who had themselves lost to Gabon (1-0) and Morocco (2-0).

Various permutations had raised hopes of qualifying for the knockout stage and made the encounter a make or break affair for the Black Stars - to win the final Group C game and hope to advance, or lose the encounter and exit altogether.

In the end they bagged the latter, and in a disappointing fashion too, for on a day they seemed to exorcise their goal drought and scored two, they also let in three.

In the course of the debacle, Skipper Andre Dede Ayew got on the wrong side of harsh refereeing and was expelled from the game that was only 23 minutes old, leaving his colleagues to battle with 10 men. He was deemed to have injured Comoros goalkeeper Boina Ben.

But an emotional Asamoah Gyan, almost choking on his words, did not just engage in a wound-licking exercise as he berated Ghana's performance, he had a few words for the way forward for the Black Stars as he contributed to a SuperSport tournament coverage punditry.

"It is what it is. For me I can't even explain. For me I don't think it's a red card though but at the end of the day he went out, the team had to play with 10 men. Even with 10 men I was really happy with how they played, they were able to score two goals with 10 men... After the red card, that was the Ghana I wanted to see but at the end of the day we're going home. We have to blame ourselves, there might be the reason why we didn't play well ... whether we like it or not we are out of the competition. No excuses, we have to see what we have to do to come back strongly... I think everybody will be disappointed, not only Ghana, but a lot of African countries you know, one of the giants (is) going out of the competition with just one point. It's strange to me but this is football, we have to go back home and put certain things together and make sure we're coming (back) with the right mentality..."

As it ended in Group C, Morocco topped with 7 points, followed by Gabon 5 points, The Comoros 3 points and Ghana 1.