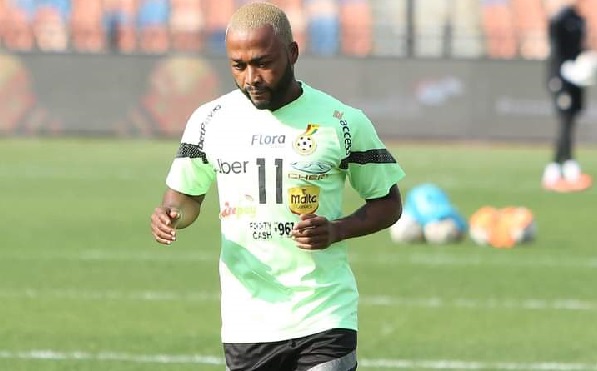 Gladson Awako will lead the Black Galaxies at the CHAN tournament
30.5k Shares

When the home-based senior national team, Black Galaxies, kick-off their African Nation Championships (CHAN) campaign against Madagascar on Sunday, winning the country’s ever CHAN title will be their biggest driving force during the tournament in Algeria.

Coach Annor Walker’s side will be looking beyond getting a good start in their Group C clash at the Mohamed Hamlaouj Stadium in Constantine, Algeria, and will be looking to ride on their impressive form in their fourth continental campaign.

In their build-up to the CHAN tourney, the Galaxies have already secured victories over Al Ahly and Egypt U-20 in friendly encounters and managed a goalless stalemate with Algeria last Saturday.

Before moving to their base in Constantine, the team will engage Mozambique in their final preparatory game tomorrow (Tuesday) in their final dress rehearsal that will offer Coach Walker’s side a fair idea of what to expect from the tournament which starts on Friday.

Ahead of the Ghana’s opener against Madagascar, the Management Committee chairman of the Galaxies, Dr Tony Aubynn, has given clear indication of their mission in Algeria, as they make a comeback to the continental competition reserved for players plying their trade in their domestic leagues.

Dr Aubynn, a member of the Ghana Football Association’s Executive Council, expressed the hope that the team was prepared and motivated to return home with the trophy after missing it in 2009 and 2014.

He believes the Galaxies have had the best of preparation and that should be enough to give the country her first CHAN title.

“We are not going to take any team for granted. We are going into this tournament with the plan to treat every team with the needed respect that they deserve.

“I have a lot of confidence in the players that they are ready and willing to make history by delivering the trophy for the country,” he told ghanafa.org.

Eight years on, Ghana have another opportunity to win the tournament, if they qualify from Group C of the CHAN which is made up of Madagascar, Sudan and Morocco.

Coach Walker is very much aware that Ghanaians expect nothing short of the continental trophy on their return to the competition for the first time since 2014.
“We are here with clear intentions and our aim is to win the trophy. It is one trophy that Ghana has not won,” said Coach Walker.

After their game with opening Group C fixture against Madagascar, the Galaxies will face Sudan on January 13 in the second match before coming up against Morocco on January 23.