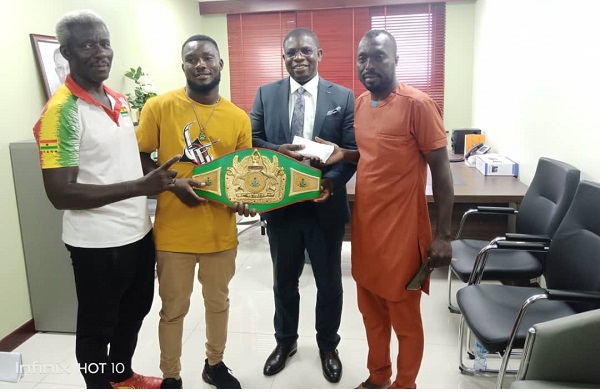 TWO Members of Parliament (MPs) have assured some boxing stakeholders that they would use their leverage in Parliament to ensure an increase in funding for the sport and other least-financed sporting disciplines.

The MP for South Tongu and a member of the Parliamentary Select Committee for Sports, Youth and Culture, Mr Wisdom Kobena Mensah Woyome, and the MP for Gomoa West, Mr Richard Gyan-Mensah, both alluded to the low yearly budget alloted to sports by the Ministry of Finance and pledged to work to increase the sports budget.

They made these remarks last Tuesday when the new national lightweight champion, Richard Fenyi, presented his belt to them in their respective offices at the Parliament House in Accra.

"We must take sports seriously as a business; the budget to the discipline is meagre and I will try and liaise with the relevant authorities to increase it," Mr Gyan-Mensah said.

He later presented GH¢2,000 cash to the boxer to help in his training and called for a more serious approach towards sports development in the country.

Fitsquare Gym’s Fenyi, who hails from Gomoa West, defeated Victor Kuwornu of Bronx Gym in the ongoing Deluxy Boxing League at the Bukom Boxing Arena in Accra a fortnight ago.

While congratulating Fenyi, 21, on the feat, Mr Woyome challenged him to strive harder to win the world title.

"I will follow your exploits and I hope you will carry on from this and win the world title. You have my support and I won't fail you," he gave an assurance.

Fenyi's Manager, Alhaji Mohammed Samadu, revealed that the young pugilist was poised to fight for the WBA World Youth title in South Africa if all went well.

"Fenyi is a world title prospect and I believe he can win the world title in two years," he stated.