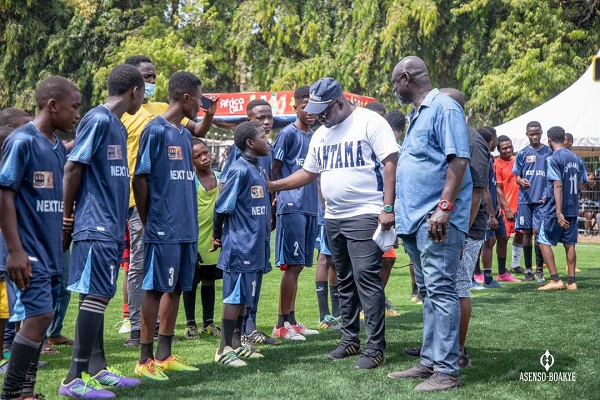 Mr Franciss Asenso-Boakye(2nd from right) inspecting one of the participating teams
30.5k Shares

They won the final of the tournament after tie-breaking penalty shootout to separate the two sides which settled for a scoreless draw at the end of regulation time at the Bantama Lebanon Astro turf pitch.

Dubbed “Asenso-Boakye Under-14 Ball-Paa tournament”, it was sponsored by Mr Asenso-Boakye, NPP MP for Bantama, to revive juvenile football in the constituency.

Speaking to the media after the final, the MP said he sponsored the tournament to revive juvenile football and also to unearth football talents in the constituency. He was confident that the competition would help create the much needed platform for talented youngsters in the constituency to exhibit their talents.

“I am committed to improving the sporting discipline in the constituency. With the right grooming, most of these youngsters can become world-class players,” said Mr Asenso-Boakye, who spoke proudly of some of the great footballers who have emerged from Bantama, including former Black Stars captain and coach, Kwasi Appiah, and Asante Kotoko legends such as Prince Opoku Polley and Sarfo Gyamfi.

He gave an assurance that he would continue to support juvenile football in Bantama to engage the youth positively by keeping them away from deviant behaviour.

The Chief Executive Officer of Kotoko, Nana Yaw Amponsah, who was the special guest of honour at the competition, expressed excitement at the display of skills and talents at the maiden tournament, and commended Mr Asenso-Boakye for the initiative.