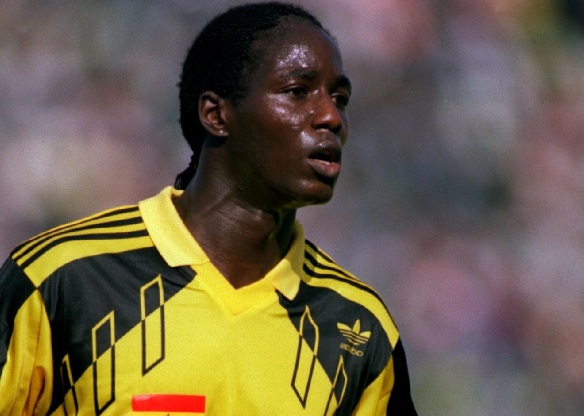 A Former Ghanaian striker, Anthony Yeboah, has opened a can of worms about the age-long captaincy rivalry in the national team, revealing that a decision to overlook him as Black Stars captain for the 1992 Africa Cup of Nations final against Cote d’Ivoire affected Ghana's chances to win a fifth continental title.

Speaking 28 years after the Black Stars lost the tie 11-10 in a penalty shoot-out at the Stade de l'Amitié in the Senegalese capital Dakar, Senegal, Yeboah poured his heart out about his hurt and anger, saying the decision to hand the captain’s armband to Anthony Baffoe in the absence of suspended captain, Abedi Pele, affected the performance of a Kumasi-based ‘faction’ in the team.

Then Ghana’s second biggest star of the team who was at the peak of his career in the German Bundesliga, Yeboah revealed in an interview, to be aired today on GTV Sports+, that Ghana’s coach at the time, Otto Pfister, told the team the team from Ghana that Baffoe should be captain for the final match, a decision he claimed  did not go down well with some senior players in the team, given that Germany-based Baffoe was a relatively new player in the team.

“To be honest I was very surprised and at the same time, the Kumasi group also was shocked so it was affecting us during the game. They knew I was assistant captain...” Yeboah said in an interview with GTV Sports+.

The two-time Bundesliga top scorer, who claimed to have convinced Baffoe to represent Ghana at international level, also revealed attempts by his manager to convince Baffoe to relinquish the armband.

Yeboah said although he did his best to motivate the team, the announcement had a negative impact on the team.

"You can see it affected the team... Definitely, It was in my mind, I was a little bit angry. I tried to score but it wasn't working".

However, Baffoe, who is now a Deputy General Secretary of the Confederation of African Football, explained in a live video conference interview on GTV Sports+ he was taken by surprise when the coach announced at a team meeting that he was going to lead the team to the final.

He denied claims that there was an attempt by his [Yeboah’s] manager to negotiate with Baffoe to relinquish the armband in order to restore calm in the team’s camp.

“Let me set the record straight. Nobody called me [on the captaincy issue]. This is not true. I am not keen on captainship
“Abedi never ever mentioned anything about captainship to me even though we were roommates and very close,” Baffoe stated emphatically from his Cairo base.