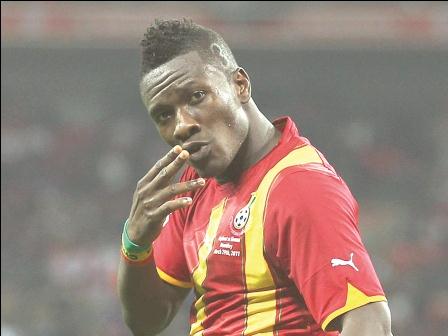 After thumbing the Sudanese 4-0 to close the gap between Ghana and Group D leaders, Zambia to one, Gyan said the decision to allow the AC Milan star to captain the team was influenced by superstition.

Gyan said ‘today, I was a little superstitious and allowed Muntari to lead the team. He is one of the senior players in the team and it was also my sign of respect.’

The striker who was replaced in the early second half put Ghana ahead in 19 minutes, following a failed attempt by John Boye to connect with his head a fine free-kick swung in by Wakaso Mubarak from the far right.

The former Sunderland striker said ‘it is a very good win for us. We learnt before the game that Zambia had drawn away in Lesotho and that greatly boosted our confidence. We kept our composure and we proved that we came here to win today.’

Gyan’s goal, his 32 in 71 appearances is only one away from the national record held by former three times African Footballer of the Year, Abedi Ayew Pele.

The forward was optimistic the team could travel the length as Ghana seeks to answer the roll call at the Mundial for a third successive time.