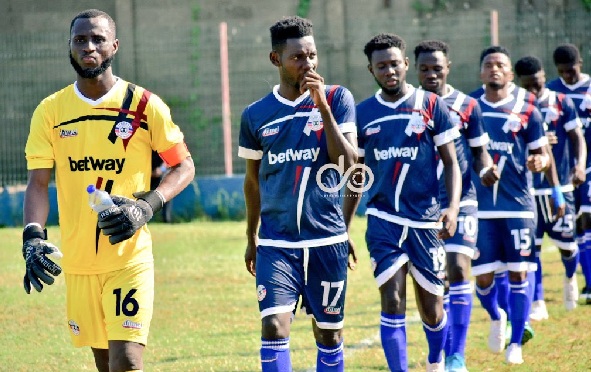 Dansoman based Liberty Professionals were last Saturday held to a one all drawn game against visiting Eleven Wonders at their backyard at the Carl Reindorf Park at Dansoman in Accra.

The visitors took a 43rd minute opener at the Carl Reindorf Park before the Scientific Soccer lads restored parity a minute later through Kweku Karika.

Back from recess, Liberty adopted a counter-attack approach and sat back to bait their opponents.

But the homesters failed to string passes together in their opponent’s area.

Striker Ahmed Satar nearly got a late winner for Liberty Professionals with his free-kick, but his effort was saved by the Wonders goalkeeper.

The draw meant Liberty Professionals remain winless after picking just three points from their opening three games of the season.

Eleven Wonders meanwhile have recorded a win and two draws so far in match day three of the Ghana Premier League staged so far.

At Cape Coast Ebusua Dwarfs secured their first win of the season after a hard fought victory over former champions Berekum Chelsea at the Cape Coast Stadium.

Captain Dennis Korsah netted the only goal in the first half as the Crabs defended resiliently to ensure the three points was in the bag.

Ebusua Dwarfs began the game with an onslaught in search of an early goal and nearly fetched the opener in the early minutes of the game.

The probe finally paid off when skipper Dennis Korsah broke the deadlock in the 21st minute following a brilliant telepathic display in the area of their opponent.

Chelsea quickly recovered from their slumber as they produced a fight which could have seen them level before the break.

However, Dwarfs were solid and played to instructions by keeping their defence locked and went into the break with the deserving lead.

Despite the late surge by the Chelsea attack, Dwarfs withstood it and held on for the win.

Dwarfs will next travel to Accra to play Great Olympics with Berekum Chelsea hosting Liberty Professionals at the Golden City Park.