I was not driving - Atsu speaks after accident 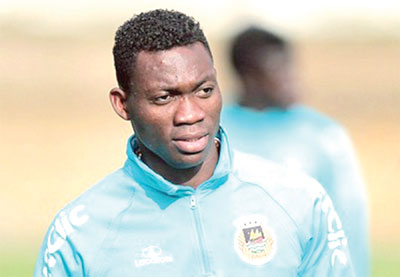 Ghana’s midfielder Christian Atsu has denied that he was the one driving his luxury BMW that crashed after it had somersaulted three times on a Portuguese highway on Sunday.

The Porto winger has been forced to come out with the denial after Portuguese national newspaper Morning Post reported that Atsu was behind the wheels of the car.

His version of the story has also been backed by his club Porto who have also come out with a statement to back the winger’s claims.

Atsu says he was in the car when it was involved in the serious accident that left the luxury vehicle completely destroyed as he miraculously escaped unhurt.

But the youngster insists that his female friend who was in the car with him was the driver of the vehicle when it crashed.

“It was my car, but it was not me who was driving,” Atsu said.

The accident happened as the driver attempted to overtake another car to exit the Amial Highway in Porto but hit the metal railings, flipping over several times before landing on the Fiat Punto.

Atsu who was in the company of a female, and the driver of the other vehicle were taken to the St. John’s Hospital but were discharged shortly after.

Their narrow escape was a massive surprise for onlookers as the BMW which cost 5$65,000 was completely destroyed. — Ghanasoccernet