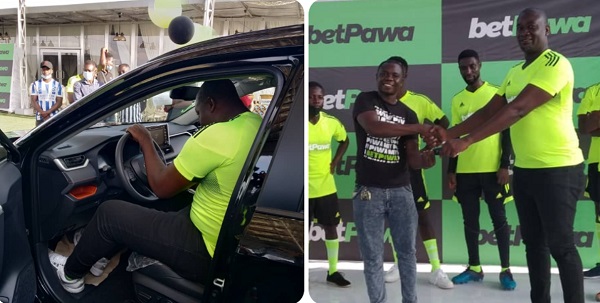 Mr Koranteng, a native of the Eastern region of Ghana was among eight contestants who competed for the vehicle in a knockout format of penalty shootouts with traditional shootout rules (five penalties each with sudden death if needed), and their opponents in goal for the penalties.

He won three knockout contests against Ampofo in the quarterfinals and Seth in the semi-finals before edging Biney in the final.

Second-placed Biney won GHS6,000 for his efforts while the third to sixth place contestants win GHS3,000 each and the seventh to eight placed contestants won GHS1,500 each.

The eight qualified for the penalty contest after placing a bet on an English Premier League match on betPawa in August.

Despite the hindrance of playing in the contest while wearing jeans and sneakers, Mr Koranteng said he has no doubts that would win the vehicle.

"I knew I was going to win, so when I was called I said this is the opportunity for me," Koranteng said in an interview with GraphicOnline.

"I am not a footballer but like most Ghanaians I like football, so I just psyched myself up to take part in this contest".

"If you are wise enough, you will never go and sell your property to bet. You must always bet wisely. It's a game of chance, you cant put your trust in it that you must win at all cost".

The event was supervised and graced by the Executives from the Gaming Commission including, Operation Officer Bernard Ansah and Monitoring and Investigation Officer, Johnson Oduro.

On his part, the Marketing Coordinator of Betpawa, Mr Nicholas Bati said the contest forms part of efforts to reward loyal customers of the company.

He added that Betpawa will on Monday begin a similar campaign dubbed Betpawa Dream Maker which will provide some lucky Ghanaians with funds to make their dreams come true.

He said as part of the campaign, a branded Betpawa Dream Maker vehicle will tour Accra for four days beginning Monday to meet persons who will benefit from the event.