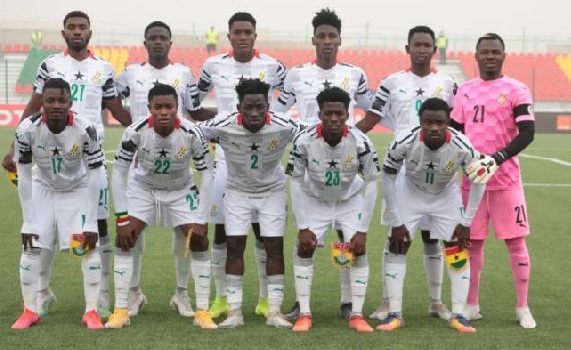 Black Satellites defender, Samuel Quaye, has called on his teammates to go all out against Gambia when they lock horns in the semi-final of the ongoing African U-20 Cup of Nations in Mauritania today.

Quaye, who has been an instrumental figure in the team, told the Graphic Sports that they were focused on going past the Gambians who they lost to in their final Group C match at the tournament.

Today's clash at the Stade Olympique in Nouakchott provides the Ghanaians with an opportunity to avenge the 1-2 loss and secure a place in the final on Saturday.

The Satellites started the tournament in a whirlwind fashion with a 4-0 thrashing of Tanzania, drew goalless with Morocco before losing to Gambia in their final group game to qualify for the knockout stage as one of the best third placed sides. However, Quaye and his teammates raised their game to eliminate tournament favourites Cameroun 4-2 on penalties last Thursday to book another date with the Young Scorpions.

“We are going all out in the game against Gambia,” assured Quaye. We need a win and we will do everything within our power to make the finals.

“It is going to be a tough game but we have learnt from our mistakes in the previous encounter and we are going to correct them.”

While Ghana finished off Cameroun on penalties after a 1-1 stalemate in extra time, Gambia comfortably edged out Central Africa Republic 3-0 to set a rematch with the Satellites.

Coach Zito is expected to make some changes into the team that started against Cameroun with centre-back Nathaniel Adjei set to return into the team.

The likes of Danlad Ibrahim, Frank Asinki, Akoto Philemon, Samuel Abbey Quaye, Patrick Mensah, Uzair Alhassan, Fatawu Isshaku, Emmanuel Essiam, Mathew Anim Cudjoe, Daniel Afriyie and Percious Boah must lift up their game and be lethal in front of goal to trouble the bulky defenders of Gambia.
Meanwhile, the Gambians will fight to do the double over Ghana in a bid to stop the Satellites from snatching a fourth African U-20 Cup of Nations trophy.

A second win over Ghana would offer Gambia a chance to win its maiden trophy at the tournament after their best performance in the championship in 2007 when they finished as bronze medallists.

Winners of the semi-finals will advance to the final match which will be played at the Stade Olympique de Nouakchott on Saturday.