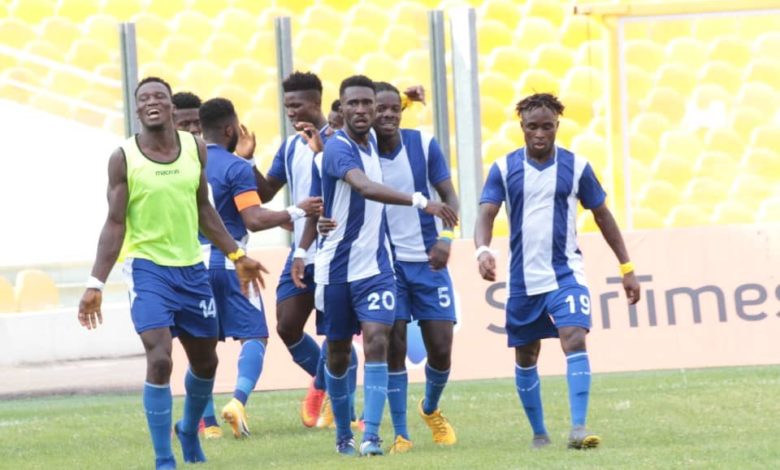 The Great Olympics team have been in splendid form this season
30.5k Shares

Former vice-chairman of Accra Great Olympics, Humphrey Williams, has promised to reward the entire playing body with a huge financial package if they can beat regional rivals Accra Hearts of Oak on Saturday.

The ‘Dade Boys’ are scheduled to lock horns with arch rivals Hearts at the Accra Sports Stadium in a Ghana Premier League matchday 11 fixture.

The two sides dropped points in their matchday 10 games with the Phobians drawing goalless against Berekum Chelsea while Olympics were held at home by Karela United.

Hearts and Olympics will be looking to return to winning ways in this fixture with bragging rights at stake for both sides.

Speaking to Happy FM in an interview, Williams said “Immediately after the final whistle, I will join the team in the dressing room and deliver the package to them”.

“All they need to do is to ensure they beat Hearts of Oak and I will reward them handsomely.”

Hearts are placed second on the league log with 16 points and lead seventh-placed Olympics with just a point with 15 points.

The match is expected to be a thriller especially when both capital sides are playing well. The last fixture between the pair was a 4-0 thrashing in favour of the Phobians.

However, Olympics are looking forward on avenging a painful defeat in last season’s truncated league by ensuring an emphatic victory on Saturday.