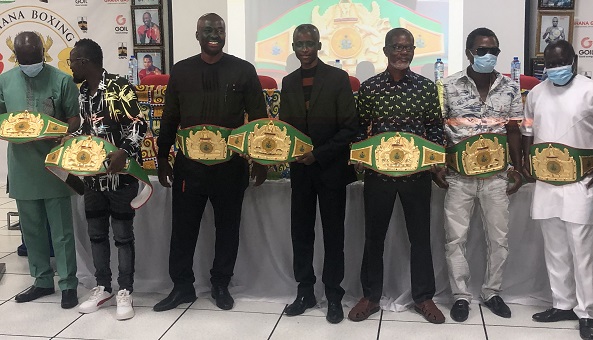 The President of the Ghana Boxing Authority (GBA), Mr Abraham Kotel Neequaye, has called on boxers in the country to take advantage of the new national titles and remain competitive in their respective divisions.

Mr Neequaye said the decision by the new board to procure new national titles, a car and a new website was to help reshape and revive professional boxing in the country.

Unveiling
Addressing the media at the inauguration last Friday, the GBA boss said the unveiling of the new website, national titles and the car represented some of his initiatives to rebrand the authority.

“This is a perfect opportunity for the young and upcoming boxers to be competitive and win national titles for themselves,” he said.

“I am glad this would be a manifestation of some of my promises to the boxing fraternity before I became the president. I call on each and everyone of you to come together for us to reshape and revive professional boxing in the country,” he explained.

The Deputy Director General (Technical) of the National Sports Authority (NSA), Mr Kwame Amponfi Jnr, praised the new GBA leadership for taking a bold step to rebrand itself within this short period.

Mr Amponfi Jnr said he believed that the initiatives would motivate fighters in the country to aspire to win titles in the country with the acquisition of the new national titles.


“This is worth celebrating, especially after taking over within this short period. I am glad to see a federation putting things together to rebrand itself because it will go a long way to project their image,” he noted.

For his part, the Chief Executive Officer of Trust Sports Emporium, Mr John Yaw Nimoh, pledged his outfit’s commitment to ensure boxing continued to thrive in the country.