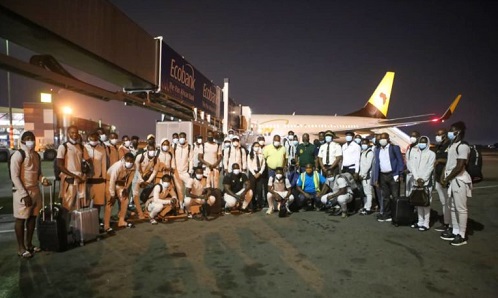 Ghana’s Black Stars touched down in the country after they played 1-1 with Bafana Bafana of South Africa at the FNB Stadium in Johannesburg on Thursday.

By that draw, the Black Stars had secured a ticket to the next Africa Cup of Nations tournament scheduled for Cameroun next year.

The team is expected to start preparation for their final game against Sao Tome and Principe at the Accra Stadium on Sunday.

According to the Ghana Football Association, the team is expected to train at the Accra Stadium before their final game on Sunday.

The Black Stars are currently top of Group C with 10 points followed by South Africa who also have 10 points and would want to consolidate their gains with a victory against Sao Tome and Principe.

Andre Ayew’s spot kick in the 49th minute ensure the Black Stars beat Sao Tome and Principe during the first leg at Sao Tome and will be hoping to replicate that on Sunday.