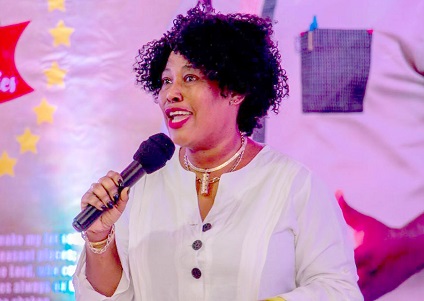 When one hears the name Nana Yaa Akyempim Jantuah, what immediately comes to mind is the media and public relations practitioner with long-serving experience and expertise.

That is why when the news of a new general secretary for the Convention People’s Party (CPP) broke at the weekend, people asked which of the Nana Yaa Akyempim Jantuahs? “Is this person our own Nana Yaa, or there is another Nana Yaa?” they asked.

There are people who didn’t know that she had ever been involved in politics, let alone win such a high and important position in the party.
Well, the newly elected General Secretary of the CPP is the same Nana Yaa Jantuah we know who has 27 years experience in media/public relations.

Nana Yaa Jantuah urged women during an interview with The Mirror to remain focused on whatever they did and have a positive mind to succeed.

The general secretary said if they had a divided attention or became unsure of what they were doing, it would affect what they did.

She noted that women were capable and should just purpose themselves and put in their all in pursuing their careers or vocations.

“If I had doubts about the possibility of my winning the general secretary position, I wouldn’t have gone in, but I went in with a positive thought and I made it.

It didn’t also come easy. I needed to have a working plan, be committed, dedicated and also sacrifice to be able to attain this goal,” she said.

She said the CPP would put in place measures to take care of single parents by establishing schemes that would cover the child and mother to help alleviate some of the difficulties that they faced.

Nana Yaa Jantuah said another area of focus of the party was education, and they intended to extend and expand the Free Senior High School programme to the tertiary level and sponsor people, including even those over 60 years who still wanted to be educated.

“In addition to this is the issue of accommodation and basic amenities, including roads, particularly in our villages, to help farmers transport their produce and help with the easy movement of people, especially when a woman is in labour and she has to be rushed to the hospital.

“During my tour of the constituencies, I had some experiences and these will help me in taking decisions about the development in our rural communities and the way infrastructure has to be made available everywhere,” she said.

Preparing from all fronts

Touching on how they were going to win power to be able to do the things they cherished, she said they were preparing the party from all fronts to win power in the 2024 election.

In the short term, she said they hoped to ensure that they had at least more than 10 members of Parliament in the next Parliament of Ghana.

“We will give equal opportunity to deserving members of the party, whether local or international, as and when it becomes necessary,” she said.

She said she was a team player and would help coordinate all the various organs of the party to carry out the constitutional mandate.

The party will also re-institute the Kwame Nkrumah Ideological Institute to educate the current generation on the principles and values of Nkrumahism and Pan-Africanism.

As a young journalist, Nana Yaa Jantuah worked at the Ghana Broadcasting Corporation (GBC) and Ghanaian Times and was instrumental in the institutionalisation of the Kwame Nkrumah Chair.

She continued her career at the Ghana Investment Promotion Centre and worked on a lot of investment promotion missions to bring investment into Ghana.

Nana Yaa Jantuah said she also worked at the Ghana Free Zones Board for four years. At the Free Zones Board, she was the coordinator for AGOA, an initiative of the United States of America to promote businesses in Ghana. She later worked with the Public Utilities Regulatory Commission (PURC) from 2004 to 2017.

She is one of the few women who have risen to become a director of Public Relations in the Ghana Public Service.

The new general secretary has worked with all the Presidents of the Fourth Republic in Ghana and was also involved in evolving a democratic process which was the referendum towards moving Ghana from military rule to democratic rule.

On the international front, Nana Yaa Jantuah has represented Ghana in so many panel discussions, including the meetings of the African Forum for Utility Regulators in South Africa, Nigeria and Mozambique.

She was awarded an honorary doctorate degree for excellence in the practice of Public Relations and has taken courses at the University of Florida, University of Michigan, Harvard University and Stanford University, all in the USA.

Currently, she is reading a doctorate degree in Business Administration from the Swiss Business School through NIBS.

Nana Yaa Jantuah was born into the CPP family and Nkrumahism.

She is the daughter of Senior Comrade F. A. Jantuah and Mrs Constance Jantuah. She got involved in politics when she was 10 years old in Kumasi.

She got the opportunity to listen to advice from such senior citizens as Kojo Botsio, Komla Gbedemah, Krobo Edusei, Alhaji Mohammed Farl who is the current Chief of Nima, Okutwere Bekoe, Alhaji Imoro Egala, her uncle KSP Jantuah, Dr Hilla Limann and Mrs Lucy Enin, among others.

She was trained and sat at the feet of these great people and comrades of the CPP to learn the rudiments of politics and the workings of the CPP.

Nana Yaa Jantuah never knew that one day, she would vie for the position of and become the General Secretary of CPP.