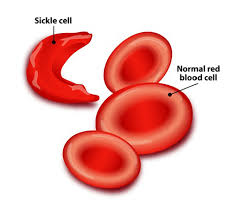 The Mirror celebrates some individuals volunteering with the Sickle Life Society who are living with the disease and also empowering others to live above the stigmatisation and enjoy a better life. Follow @Graphicgh

On Friday, June 19, the World Sickle Cell Day was marked across the globe with various virtual activities online due to the COVID-19 pandemic.

World Sickle Cell Day is a United Nations-recognised day to raise awareness of sickle cell at a national and international level. On December 22, 2008, the United Nations General Assembly adopted a resolution that recognises sickle cell disease as a public health problem and “one of the world’s foremost genetic diseases”.

The resolution calls for members to raise awareness of sickle cell on June 19 of each year at the national and international level.

Sickle cell disorders are a group of illnesses which affect your red blood cells. Sickle cell is a genetic condition, which means it is passed on from your parents and you are born with it; you cannot catch it from other people.

As part of the World Sickle Day, The Mirror celebrates some individuals volunteering with the Sickle Life Society who are living with the disease and also empowering others to live above the stigmatisation and enjoy a better life.

Pearl was diagnosed with sickle cell disease when she was 13 years old. She was already in the senior high school.

For her, the news about her condition was not properly broken to her as she always thought that sickle cell disease was a death sentence.

“I knew I had bone pain sometimes, but I was told it was rheumatism and so I was not allowed to play in the rain. Thinking about it now, it is hilarious,” she said.

While in the senior high school, she fell very sick and some tests were run on her. When the test result came, it revealed her genotype as SS, meaning she had sickle cell disease.

“The doctor asked me to invite my mother over to the school. The following morning when my mother went to see the doctor, the doctor explained the disease to her.

“Her reactions showed that she had always known about the disease and also disclosed to us that was the reason my father had been absent almost all my life,” she recalled.

That was heartbreaking news to her, and the thought of it was killing her.

“The moment I was told, everything in my life changed. I cannot begin to count the number of opportunities I have missed out on because of this disease.
“Putting my father's departure aside, I had heard from others that those with sickle cell disease were a curse to society and that was the reason they died early,” she stated.

“Just after the discovery of my status, I started falling sick and some of my mates stigmatised me; this made my anxiety disorder get worse. However, later on in life, I got some very good friends, family relations and mentors who made me have a strong will,” she stated.

Having gained her confidence back, she started educating people about the disease on her social media accounts, in schools, on radio, television and in workshops.

In 2017, she started volunteering with Sickle Life to amplify her voice and to serve as a mentor to people living with the condition.

At Sickle Life, she is the Adolescent Mentorship Project Lead and every year they organise awareness campaigns to inspire people with their stories and encourage them to live to the fullest.

“I have become passionate about sickle cell disease in young people because I believe if they get to know their status early, it will help them make the right and informed decisions in their lives.

“This will go a long way to decrease the number of children born with sickle cell,” she noted.

She is 27 years old living with the genotype SS sickle cell disease. According to her, she was the only one in her family with the disease.

She didn’t know any person living with the disease and as a result, her curiosity made her read about the disease just to know more about her condition.

“Growing up, I never faced the stigma because I was loved by everyone around me. However, things changed when I gained admission to the tertiary institution. That was my first time schooling in another region away from home.

“Although in my application to the nursing college I stated my condition, I decided to hide my status from my mates when I gained admission for fear of stigma,” she recalled.

According to her, in the nursing college, first-year students were made to work like students in the secondary school boarding house. In the first two weeks after admission, she joined her mates in weeding and doing other tedious work.

Unfortunately, she ended up having a crisis and was admitted to hospital.

“That was the beginning of my stigma. My principal once told me if she knew I had the disease, she wouldn’t have admitted me. Meanwhile, I stated my condition boldly on the application form.

“I always tried to hide from her because she always reminded me of my status in an embarrassing way no matter where she met me,” she recounted.

“I was once asked if I had seen a ‘sickler’ who was a nurse before. This almost discouraged me from becoming a nurse. I almost gave up schooling in the first semester of my first year because I wasn’t happy. The embarrassment was just unbearable,” she noted.

Due to the stigmatisation, one day Akosua came home and refused to go back to school. Her parents had to intervene by sending her to the Sickle Cell Clinic at Korle Bu to be counselled.

“That was where I was shown pictures of doctors, nurses and other health practitioners who had sickle cell disease like me and are doing so well in their profession. It motivated me to go back to school because I was determined to be a nurse,” she said.

According to her, the stigma by the principal was constant throughout her stay in the school. However, she decided to grow a tough skin for her constant embarrassment until she completed school.

Aside from the first crisis she had in her first year, she never had any crisis throughout her nursing education.

Today, she is a professional nurse, giving a helping hand and care to the sick.
When it comes to relationships it hasn’t been rosy for her. She had to sometimes hide her status from men because she was scared of rejection.

According to her, her relationship always went well until she disclosed her status to her partner.

“Men always love and like me when my status is unknown to them. But immediately I disclose my status, that likeness and love disappear completely.

“I’ve met men with genotype AA, which is the best genotype choice for me; however, they always walk away after knowing my status,” she narrated.

Akosua recounted a case in point where a certain man who initially showed interest in her decided to block her through all means after knowing her status.

“I always ask myself, if the men with genotype AA are rejecting us, who should we go and date and marry? Should we date men who are living with the disease like ourselves?

“The stigma and rejection in my relationship life are real and tough for me but I pray that I will meet a man someday who will accept me for who I am,” she lamented.

“My family have been the greatest support of my life. They’ve always been there with me and for me.

I really appreciate their love and support. If it hadn’t been for them, I would have given up my nursing career when the stigma started in school. They’ve never given up on me. They are the best family I could ever wish for,” she stated.

Akosua, who is a volunteer with Sickle Life, said she got to know about the foundation during one of her routine visits to the Sickle Cell Clinic at Korle Bu in 2017.

“I immediately got interested to join and meet people like me and learn from them too. Becoming a volunteer of Sickle Life has really helped me to be able to handle stigma.

I used to hide my status from everyone, but Sickle Life has helped me to develop boldness to face the stigma associated with the disease so I don’t hide my status anymore,” she said.

Nana Ama is a 25-year-old lady living with sickle cell disease (SS). She grew up knowing she was the only person among her siblings and friends who had the disease.

Hardly did she complete a full week in school. It was either two days a week or not at all. As a result, she had to sometimes hide from the public because she got the nickname "tomorrow I will die".

To make matters worse, some doctors told her parents that she would not go beyond 18 years. That scared the hell out of her mother who was a sickle cell patient as well.

By dint of hard work, she made it to the senior high school but spent the first year in the hospital.

In her final year in the senior high school, she wrote her final mock with IV fluids on her in the examination hall because she could not afford to miss the exam.

Thankfully, she gained admission to the teachers training college but everyone was scared she wouldn't make it.

“My doctors told me to find another job to do because they didn't think I would survive it. I wouldn't say it was a piece of cake but actually a roller coaster. I had to defer examinations because I was always either in the hospital or sick in the dormitory,” she recounted.

“These challenges didn't stop me because I made a promise to my mum before she passed away to complete my education. I finally completed school and I’m now a teacher. It's not been easy but there are brighter days ahead,” she stated.

According to her, living with sickle cell disease had taught her some great life lessons, saying: “I’m now an advocate of the disease and I’m able to speak to people about it. I have started my own foundation to help people live their best lives with the disease.

My foundation is called Ike-Eve Sickle Cell Foundation. It was created in memory of my mum because it was our dream to fight sickle cell disease together. I have a long way to go but I will gradually get there.”
Nana Ama believes the only way to let people know more about sickle cell disease is by putting herself out there and sharing her story for people to know more about it and avoid stigmatisation.

“I have grown to know I’m not the only one fighting this battle and doing everything to stop stigmatisation. People I never knew are willing to help me fight this battle against sickle cell disease,” she explained.