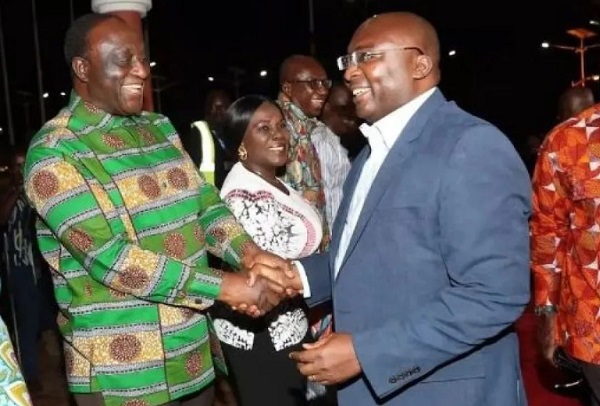 Former Chief of Staff in the President Kufuor administration, Kwadwo Mpiani has raised doubts about the likelihood of Vice President Mahamudu Bawumia and Minister of Trade and Industry, Alan Kwadwo Kyerematen running on the same ticket in the 2024 presidential election.

The pair are seen as frontrunners for the New Patriotic Party (NPP) flagbearer nomination by analysts.

However, concerns have been raised about irreparable cracks being created in the party after the flagbearer contest should they contest each other for the nomination.

One of the proponents for the Bawumia-Alan ticket is the Abuakwa South Member of Parliament, Samuel Atta Akyea who has argued that the arrangement will be the best bet for the NPP going into the 2024 elections.

"I believe in it (Bawumia - Alan ticket) with all my heart for the simple reason that I don't believe in any arrangement in which you cannot talk about what we call the tribal balance," Mr Atta Akyea said on the January 3, 2023 edition of Good Evening Ghana programme on Metro TV.

He said as an enlightened party, "if you look at the people who started the UGCC (they) never envisaged that if an Akan man is not in the saddle, then we can't have a government.

"I don't believe in it. I believe it is about time that this New Patriotic Party (NPP) should change our posture for once and say that this is the most powerful party with a sense of national unity and we are looking at meritocracy rather than the tribe of a man," he stressed.

However, Mr Mpiani, who has been consistent in opposing that proposal of Bawumia-Alan ticket insists that the vision of the two men to become President may not allow the pair to be on the ticket.

He said for two Politicians to be on the ticket they must share the same vision and values.

"It is easier said than done because you can't just pick anybody as your running mate if you are not sort of compatible; If you can't work with the person," Mr Mpiani said in an interview on Joy FM on Friday, the day it came to light that Mr Kyerematen has resigned to concentrate on his presidential campaign.

"In politics, we all have our visions, so if it is my vision to be a President and not a Vice President, who do you join me with another person to become a Vice Presidential candidate?".

In a related development, Mr Kyerematen has submitted his resignation letter to the Presidency to enable him to concentrate on his presidential campaign.

Background to a similar proposal

Nana Akomea, the Managing Director of the Intercity STC and a former communications director of the NPP, had similarly in April 2022 proposed a Bawumia-Alan ticket, which he said was the sure way for the NPP to go into Election 2024.

But reacting to that proposal too in April 2022, Mr Kwadwo Mpiani said it will be "a very difficult thing to do."

"If the two of them don't even get on well, though, we are all in the same party..., [same] ideology, the philosophy of the party, but that doesn't mean that the two of us [them] can really work together as the president and the vice-president," he said.

Mr Mpiani said he thinks the party should allow the contest [presidential primary] to happen.