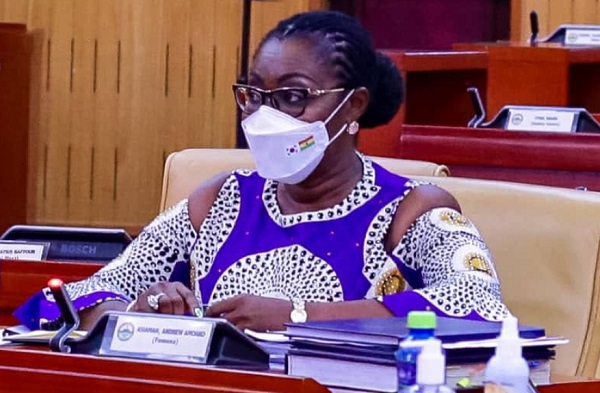 The Minister designate for Communications and Digitalisation, Mrs Ursula Owusu Ekuful, has said it is time telecommunication companies that operate mobile money paid taxes on the profits they generate from their services.

She said reports she had from the common platform, which monitors mobile money transactions, showed that in January this year alone, monthly transactions that passed through mobile money platforms amounted to GH¢81.3 billion.

That, she said, generated GH¢124.5 million in transaction fees for the mobile money operators, yet the money generated was not taxed, as applied to financial transactions, saying “if the state gets even 10 per cent of that per month, that is GH¢12.5 million”.

“In my opinion (and I am expressing my opinion here), the transaction fees generated by operators from these huge traffic volumes on mobile money platforms ought to be taxed,” she said.

When she appeared before the Appointments Committee of Parliament (ACP) last Monday, Mrs Owusu Ekuful explained: “I am not saying that individuals who send and receive mobile money should be taxed. The fees they pay to all the network operators for the service are revenue that the operators earn and the state has to be interested in that and tax them.”

The Minister designate made her opinion known when the Member of Parliament (MP) for Akuapem South, Mr O. B. Amoah, asked her if there was a policy on mobile money transactions regarding money going through the system, whether such transactions should be taxed and what the implications of such an action would be.

Mrs Owusu Ekuful spent over five hours answering questions pertaining to her stewardship as a former Minister of Communications, the closure of radio stations, subscriber identification module (SIM) card registration, the KelniGVG contract, radiations emitted by telecom towers, women’s empowerment in politics, as well as the brouhaha surrounding a chair being pulled from under her in Parliament.

She also responded to questions pertaining to her temperament, particularly her public utterances against the Minority, a development that saw her apologising to her colleagues in the Minority four times during the vetting.

The Ablekuma West New Patriotic Party (NPP) MP told the committee that she had further been informed that some of the mobile money operators had been phasing out scratch cards, insisting on top-ups from mobile money.

What that meant, she said, was that the state was losing the revenue it could have received from the sale and receipt of scratch cards.

“They are charging one per cent for each top-up on mobile money, which is money that they generate and which is currently beyond the reach of the state. So while we are losing money on the traditional money streams because of the evolution of technology, the state has disabled itself from gaining revenue from the new streams because currently mobile money and all the money generated are not taxed as financial transactions,” she said.

The Minister designate for Communications and Digitisation added that mobile money operators were already charging consumers one per cent per transaction for the services they provided for consumers.

“I believe the Ghana Revenue Authority (GRA) and the Minister of Finance ought to be interested in that,” she said.

She called for a national conversation on the matter because Ghana was losing out on the traditional revenue streams of the telecom companies because of the evolution of technology, with the number of people who made normal voice calls declining.

“So the revenue that the state would have got from that through the Communications Service Tax is declining and that is not going to go up anytime soon,” she added.

To curb the use of SIM cards to commit crimes, Mrs Owusu Ekuful said the Communications Ministry had taken a decision to revisit the issue of proper SIM card registration across the country.

She said one of the main factors that plagued SIM card registration in the past was the lack of foolproof identification cards to verify the identities of those who wanted to register their SIM cards and urged the public to take advantage of the next registration exercise.

She pledged to re-introduce the registration of both SIM cards and mobile phone devices to cut down on the theft and resale of mobile phones and tablets.

“Ghana will be signed onto the global central identity register and so if a phone is stolen from outside, it cannot be used here in Ghana because if is blocked there, it will be blocked here too,” she said.

On the closure of some radio stations, Mrs Owusu Ekuful blatantly denied allegations that she had specifically targeted certain radio stations, leading to their closure.

Giving a background to the closure, she told the committee that the National Communications Authority (NCA) was mandated by Section Two of the Electronic Communications Act, 2008 (Act 775) to regulate radio station spectrum allocated to broadcasting organisations and providers.

In line with that mandate, she said, on her assumption of office, she informed the NCA to enforce the law across various sectors.

The MP said following her charge to the NCA to enforce the law, the authority conducted an audit in 2017, which indicated that 144 stations had committed several infractions which necessitated that they be sanctioned and some of them fined.

“At the end of the exercise, 56 FM stations were closed down and 43 of them have submitted fresh applications for authorisation, out of which 30 have been processed and granted authorisation to operate.

“The remaining 13 applications will be processed within the first quarter of the year,” Mrs Owusu Ekuful said, adding that those that were shut down operated without licences.

She added that as of the end of last year, there were 625 authorised FM radio stations in Ghana, with 452 of them, representing 72 per cent, in operation, while 173 were not in operation.

No affront to freedom of expression

When the Minority Leader, Mr Haruna Iddrisu, asked if she considered the closure of radio stations an affront to freedom of expression, Mrs Owusu Ekuful replied: “Absolutely not.”

“To enjoy any right, you come to equity with clean hands. You do not flout the same law which grants you authority to operate as a radio station, in furtherance of your freedom of expression,” she said.

She, however, urged the affected stations to submit fresh applications to be processed to allow them to obtain authorisation to operate.