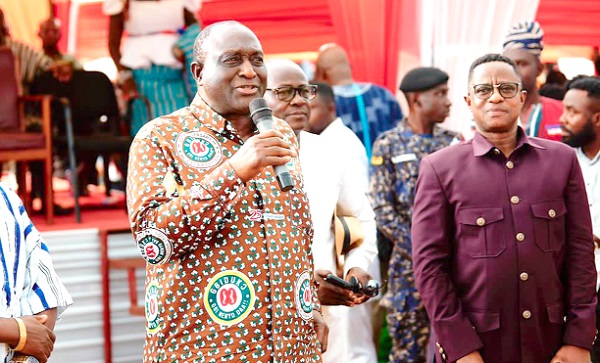 Alan Kyerematen (left), Minister of Trade and Industry, addressing the durbar to mark the Gbidukor Festival of the the Gbi Traditional Area in the Volta Region. With him in his John-Peter Amewu (right), Minister of Railways Development and MP for Hohoe
30.5k Shares

The Minister of Trade and Industry, Alan Kyerematen, has called on the citizenry to support the government, as it makes efforts to return the economy to normalcy.

He made the call during the annual Gbidukor Festival of the Gbi Traditional Area in the Volta Region last Friday.

Mr Kyerematen urged the gathering to be patient as the government stepped up plans to revive the economy.

He stressed that the government was very much in tune with the current hardships, adding “government is relentless in its efforts to turn things around so we can all enjoy the good times again.”

He commended the Fiagba of the Gbi Traditional Area, Togbega Gabusu VII, for the cultural revolution witnessed in the area.

“While l congratulate Togbega, the regional minister, and other ministers of state and Members of Parliament of the region for their relentless efforts to bring development to the area, l assure you that government is very much in tune with the current hardships facing all of us, and is relentless in its efforts to turn things around so we can all enjoy the good times again,” he reiterated.

He encouraged the people of the area to support government’s efforts aimed at resolving the situation in record time, particularly the one district, one factory (1D1F) initiative.

Mr Kyerematen indicated that the 1D1F was aimed at exploiting local opportunities to create sustainable jobs for all Ghanaians, particularly the youth in their home districts.

The Trade and Industry Minister said the festival celebrated in the area had developed a strong bond between him and the people, spanning over two decades.

“The recent love and affection from natives of the Volta Region is a confirmation of the known love affair between the two us,” he indicated.