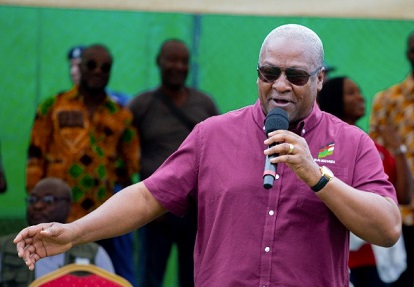 Former President John Dramani Mahama has urged the citizenry to support the anti-corruption institutions to carry out their duties fairly and courageously without interference.

Mr Mahama said this in a Facebook post yesterday in reaction to a recent pronouncement by President Nana Addo Dankwa Akufo-Addo that Akonta Mining Company was not involved in any illegal mining activities anywhere in the country.

President Akufo-Addo was said to have made the statement while addressing the Catholic Bishops Conference and 16th Biennial Congress of the National Union of Ghana Catholic Diocesan Priests Association in Koforidua in the Eastern Region on Wednesday (January 4, 2023).

“Let me respond briefly to the chairperson on the issue of illegal mining. I want to assure him and all of you that Akonta Mining is not engaged in any illegal activities in any part of the country as we speak,” President Akufo-Addo is reported to have said.

Mr Mahama said President Akufo-Addo’s comment cannot be allowed to override or become a substitute for the statutory mandate granted the investigative bodies of Ghana by the Constitution.

“Such acts fly in the face of justice and the fight against corruption, and of course erodes the faith of our citizens in our democracy," he said.

Former President Mahama also described as unfortunate President Akufo-Addo’s penchant to absolve his appointees and other close associates of any wrongdoing that put pressure on state anti-corruption institutions investigating such individuals and entities.