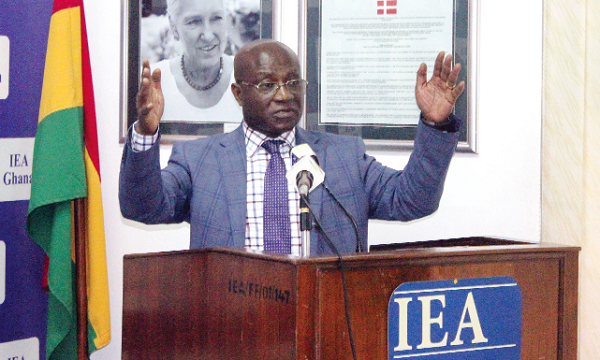 The Majority Leader in Parliament, Osei Kyei-Mensah-Bonsu, has called for a holistic review of the 1992 Constitution and the mining and mineral laws to ensure that the country’s natural resources are well managed for economic development.

He observed that such a situation would avoid “thievery of the nation’s resources, including mineral deposits" which, when properly harnessed, could accelerate the nation's development.

Mr Kyei-Mensah-Bonsu was speaking at a seminar at the Institute of Economic Affairs (IEA) on: “Reviewing Ghana's 1992 Constitution, Ghana Beyond the 17th International Monetary Fund (IMF): Our natural resources and economic challenges: The Constitutional pathway” in Accra last Tuesday.

The seminar was part of the IEA’s project on reviewing Ghana's 1992 Constitution to promote good governance and sustainable development in the country.

It is being used as a platform to collate views and issues to help shape and broaden the debate on the reform of the Constitution.


Participants at the seminar included the First Deputy Speaker of Parliament, Joseph Osei-Owusu; the Member of Parliament (MP) for Ketu North, James Klutse Avedzi; the MP for Abuakwa South, Samuel Atta Akyea, and a former Chief Executive Officer of the Ghana Chamber of Mines, Rev. Dr Joyce Rosalind Aryee, who chaired the event.

Others were the Director of Academic Affairs at the Ghana Armed Forces Command and Staff College, Dr Vladimir Antwi-Danso; the presidential candidate for the Convention People's Party (CPP) in the 2020 general election, Ivor Kobina Greenstreet; the Spokesperson for the National Chief Imam, Sheikh Armiyawo Shaibu, among others.

The Majority Leader bemoaned recent developments of manganese ore being shipped out of the country for a pittance.

He said it was for that reason that the nation must take a serious look at its mining and mineral laws.

Mr Kyei-Mensah-Bonsu further noted that when the country first discovered oil in sufficient quantities, he had insisted that “we should confine ourselves to just two or three areas, so that when the resources get depleted, we will be able to look over our shoulders and say this is what we have used the oil resources for”.

He said Parliament did not agree with him and subsequently allowed the Finance Minister to put out all the 12 oil fields for application.

“Today, we know that vast amounts of the resources are being utilised for service delivery in the country,” he said, and quizzed: “What are we doing to ourselves?"

He was equally sad that since the nation's colonial masters left the country, it had not been able to develop or construct its rail lines from Accra to Kumasi.

He said the nation was at the moment looking for investors to invest $4 billion to realign and construct the Accra-Kumasi rail lines under an agreement known as the build, operate and transfer (BOT) concept.

Mr Kyei-Mensah-Bonsu also pointed out the need to assess the composition of members of the National Development Planning Commission (NDPC) and make the institution independent and neutral.

The other discussants touched on issues such as the existing agreements for oil exploration which had not favoured the country over the years and other mineral production sharing agreements.

Others said the country’s inability to effectively harness its natural resources for development was due to the lack of integrity on the part of those at the forefront of the various agreements, lack of data on mineral deposits and a weak NDPC as an institution because of politicisation.

Other discussants were of the view that the nation needed to re-examine whether its oil discovery had been a blessing or a curse.

There were proposals for the Constitution to be used to address weak economic fundamentals, structural imbalances in the economy, the need to look at why the country's natural resources were being exploited by foreigners, to the detriment of the nation's development, among others.