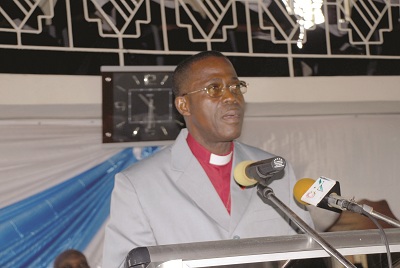 , has added his voice to a peaceful resolution of the dispute over the 2012 general elections.

That, he said, would preserve the peace of the country, which has made it an oasis of peace in Africa.

Rt Rev. Amenu, who is also the Moderator of the General Assembly of the Evangelical Presbyterian (EP) Church of Ghana, commended medical doctors in state-owned hospitals for calling off their industrial action.

The EP Moderator made these remarks when he addressed the opening session of the fourth West Volta Presbytery Synod of the church in Koforidua at the weekend.

The three-day meeting, on the theme “God of Life, Lead us to Justice, Peace and Dignity for Growth and Development,” was attended by delegates from all the 36 districts of the church.


Also present were representatives of sister churches such as the Rev. George Opare Kwapong, Chairman of the Akuapem Presbytery of the Presbyterian Church of Ghana.

It was to brainstorm on issues affecting the church and Ghana as a whole and strategise with the view to promoting the spiritual and material growth of the church and the country.

According to Rt Rev. Amenu, Ghana needed peace for its development and sustenance as such, it was the wish of the Christian community and Ghanaians that the 2012 election dispute would be resolved peacefully.

With regard to medical doctors of state-owned hospitals resuming duty after a month-long strike, Rt Rev. Amenu said such a gesture was commendable since it would save lives.

He, however, called on nurses and midwives who had also intended to lay down their tools to rescind that decision and use dialogue to address their grievances.

Rt Rev. Amenu interspersed his address with a sermon based on the second book of Corinthians chapter 13 and said it was the responsibility of all, especially those with the means or in responsible positions, to help alleviate the sufferings of the vulnerable and that Christians must take the lead in making life comfortable for such unfortunate persons.

With regard to the recent fire outbreaks in the country, especially at the Kantamanto Market, Rt Rev. Amenu called on all, especially Christians, to give the necessary assistance to the victims to enable them to be on their feet to cater for their dependants.

On the energy sector, he commended President John Dramani Mahama for the role he had played in curtailing the hitherto frequent power outages.

In a speech read on her behalf, the Eastern Regional Minister, Mrs Helen Ntoso, acknowledged the immense contributions the EP Church had made towards national development in areas such as education, health, skill training, spirituality and other social services.

Mrs Ntoso, who expressed concern about the upsurge in social vices such as rape and defilement, called on Christians to help stamp them out from society and gave the assurance that the government would continue to partner the EP Church in its development programmes for the welfare of society.

He also advised the media, especially radio stations, to be circumspect in reportage instead of polluting the mind of the people to foment trouble.

The Executive, Judiciary and the Legislature, according to Rev. Kolade, must also work tirelessly towards the welfare of society.

Pictures: The Moderator of the General Assembly of the EP Church, Rt Rev. Amenu (inset) addressing the congregation.